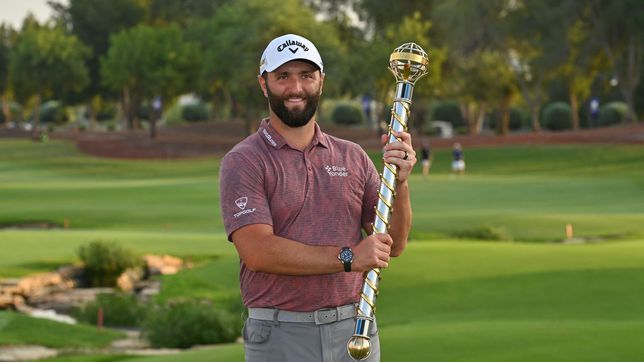 Jon Rahm left the best, golfically speaking, for the final leg of 2022. The ‘Barrika Lion’ has been at a high level for several months after having crossed a small desert in the first half of the year. After starting with many doubts in his game, staying far from victory in all majors (his best result was 12th at the US Open), the Biscayan met again in August. Since then, this is a much more recognizable Rahm. He demonstrated it once again this Sunday, when he lifted for the third time in his career (2017, 2019 and 2022) the DP World Tour Championship in Dubai (result of -20), the final tournament on the European circuit. It was precisely this irregular start to the year that prevented the Basque from receiving a double award today, since the Race to Dubai (the former Order of Merit) was awarded to him by Rory McIlroy.

“I hope people stop telling me that this has been a bad year. I have won three times around the world, each victory on a different continent. I know that they are not major titles, but despite this it has been a great season, ”Rahmbo summed up minutes after finishing his last lap. The Basque arrived in Dubai knowing that he was going through a great moment of form, and with the aim of scoring the victory in order to close 2022 in style. He had already achieved victory in the Mexico Open and the Spanish Open, and in recent months he was always in the ointment in the tournaments he played. Now, this important victory confirms the accumulated sensations, and leaves Jon with a good taste in his mouth.

Sunday’s script for the Spaniard was very similar to Saturday’s, at least in terms of play. It hasn’t been fine since tee starting point, curiously his best weapon throughout his career, but he managed to escape potential problems with a masterful set of irons and a solid composure on the green, that part of golf that weighed down Rahmbo so much in the first months of the year. After dealing the big blow yesterday, Today the one from Barrika scored a day of 67 strokes, five under par on the Earth Course at Jumeirah Golf Estates, for a total of -20, two strokes less than his pursuers, Tyrell Hatton and Alex Noren. The one who was aiming to be his main opponent, Matt Fitzpatrick, punctured in the final round and, after starting a blow from the Basque, he finished at seven.

It was hard for Rahm to come to terms with having signed such a card after being so messed up with the driver. “I don’t think I got -12 over the weekend with how bad I’ve been from the tee these two days”, admitted the Spaniard, who did not find the fairway in any of the par 5s that he played in his two final rounds. He didn’t need Rahmbo, who started Sunday with birdies at 1, 2 and 3 to secure his lead. The bogey to hole 4 was his only blemish of the weekend, with which he broke a streak of 30 holes without signing the bogey. Jon only felt the pressure from his rivals going into the final third of the lap, when Noren was just one stroke off the lead. It did not weigh on the Spaniard, who holed a kilometer putt at 13 for birdie, and at 14 he took a couple of those that are worth gold. The urgency wore off in the final stretch, and Rahm savored the final holes. “I was thinking about a video of my son Kepa”he acknowledged.

Because, in addition to three wins, the main loot that Rahm takes from this 2022 is a remarkable growth in terms of maturity. “It has been a year in which I have grown a lot, I have matured a lot and I have learned a lot about myself”, commented the Spaniard when asked about what his two children bring him (the second of them, Eneko, born last August). with his hat trick of victories in the DP World Tour Championship, there are already eight in his career on the European circuit. His percentage of wins over the total number of tournaments played on the European Tour rises to 14.3%, surpassing Seve (10.5%) and becoming the best European in this statistic. He is only behind one Tiger Woods (25.6%). Rahmbo, who at the age of 28 has already accumulated 16 victories as a professional, is in the elite. And he was not the only Spaniard who stood out in Dubai: Adri Arnaus and Jorge Campillo finished tied in 9th position with -10, although it was not worth it to climb too much in the Race to Dubai.

Despite taking the cat to water in the final tournament of the DP World Tour, Rahm failed to hoist his second Race to Dubai (what was formerly the Order of Merit, which he won in 2019). The Basque arrived in the United Arab Emirates in 14th position in the ranking and, in addition to the victory, he needed a debacle of several favorites. It didn’t happen. He finished third in this parallel classification and, Rory McIlroy (4th in the tournament with -16), kept the first place to take the fourth Race to Dubai of his career. The Northern Irishman, who had not achieved this distinction since 2015, is the third golfer who has won the European circuit the most times, and looks askance at Severiano Ballesteros’s six and, a little further from afar, Collin Montgomerie’s eight.

But this year’s is something more special, and historic, for the one in Hollywood, which he becomes the second player in history to win the PGA Tour and the DP World Tour in the same year. Months ago, McIlroy won his third FedExCup by winning the Tour Championship, thus confirming that he is sweet in 2022, a year in which he has finished in the top-10 of the four majors. In addition, the man from Northern Ireland has established himself as the great leader of world golf by being the visible face of the resistance against LIV Golf. And, along the way, has once again occupied the first position in the world ranking. This Race to Dubai is the icing on the cake for 2022, and he’s already thinking about what’s to come. “I really want to play with you in Rome,” he told Rahm. referring to the 2023 Ryder Cup. European golf has its two colossi in top form.