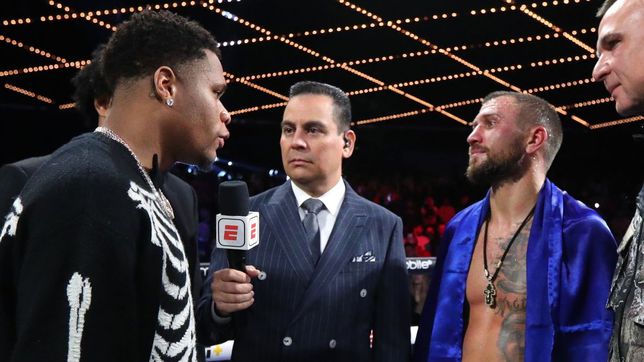 One of the most anticipated clashes of the year already has a date. Devin Haney (29-0-0, 15 KOs) will put all four of his lightweight belts on the line against Vasyl Lomachenko (17-2-0, 11 KOs) on May 20. The venue is yet to be determined, it could be in the United States or the Middle East. the promoter Bob Arumin charge of organizing the expected combat, has assured that it is a fact and that “in about 10 days they will have the headquarters ready.”

Devin Haney comes from winning twice in a row against George Kambosos Jr. (20-2-0, 10 KO) in 2022. In the first meeting, he took his titles from him and became the undisputed lightweight champion in Melbourne. Kambosos invoked the rematch clause of the contract and they met again in October. But the result was the same, victory for Haney by unanimous decision.

Lomachenko returned to the ring in October after one year. When the war broke out in Ukraine, the boxer decided to return to his country to fight for the freedom of its citizens. The Ukrainian defeated the American Jamaine Ortiz (16-1-1, 8 KO) by unanimous decision at Madison Square Garden in New York. He ended up prevailing in a very close fight.

The awaited moment has arrived. Bob Arum has assured that “the fight is already agreed”, what is missing is to know where it will be held. “New York may be an option, but the thing is where. At Madison Square Garden, but there will be playoff games in the NBA and NHL. Other options could be Las Vegas or even in the Middle East, where they have been paying well for fights like this, ”explained the promoter for Boxingscene. Lomachenko will seek to dethrone Haney to become champion again.