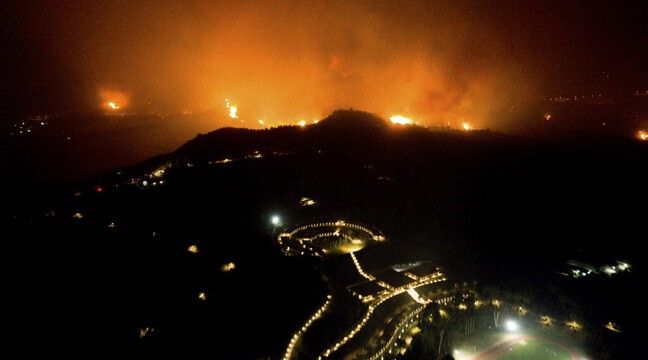 Greek firefighters continued on Thursday morning fighting two worrying fires in Olympia and on the island of Evia, in the west and east of the country, affected by a hundred fires under the effect of an exceptional heat wave. Large forces were deployed near the village of ancient Olympia to protect the archaeological site where the first Olympic Games were held in ancient times, west of the Peloponnese peninsula.

After having burned a score of houses, “the fire front is now heading towards the Lala area”, an area of ​​mountainous forest, northeast of the old site, declared this Thursday morning the prefect Nektarios Farmakis, questioned by the agency. Greek press ANA. The town of ancient Olympia, generally crowded with tourists at this time of year, as well as six other nearby towns had been evacuated the day before. On Thursday morning, more than 170 firefighters, assisted by some 50 vehicles and 6 helicopters and water bombers, were still fighting, assisted by army reinforcements, according to firefighters.

Equivalent forces were deployed on the huge island of Euboea, about 200 km east of Athens, the scene of a violent and uncontrolled fire that broke out on Tuesday in mountainous and wooded terrain dried by temperatures. The scorching heat of the past few days. Hundreds of houses burned and more than 25,000 hectares of pine forest, according to initial estimates. About 90 people were evacuated by sea this Wednesday from Rovies beach, in the northwest of the island, by the Greek coast guard. On Thursday morning, two more towns were evacuated, according to ANA.

According to the mayor of Mantoudi, a village in Evia, Giannis Tsapourniotis, the fire of great virulence is developing on four fronts, one of which is moving uncontrollably west of the monastery of Saint David, which was forcibly evacuated on Wednesday. But on Thursday morning, the wind strengthened and air assets were struggling to fly over the fires, because visibility is limited due to heavy smoke, according to the ANA.

Firefighters said Thursday morning they had to handle 92 forest fires in the last 24 hours in Greece, out of 118 accounted for on Wednesday night by Deputy Civil Protection Minister Nikos Hardalias. “We are making a titanic effort on several fronts,” he also said during a press conference. Another fire was underway in Messinia, south of the Peloponnese, where six cities were evacuated as a precaution, according to firefighters.