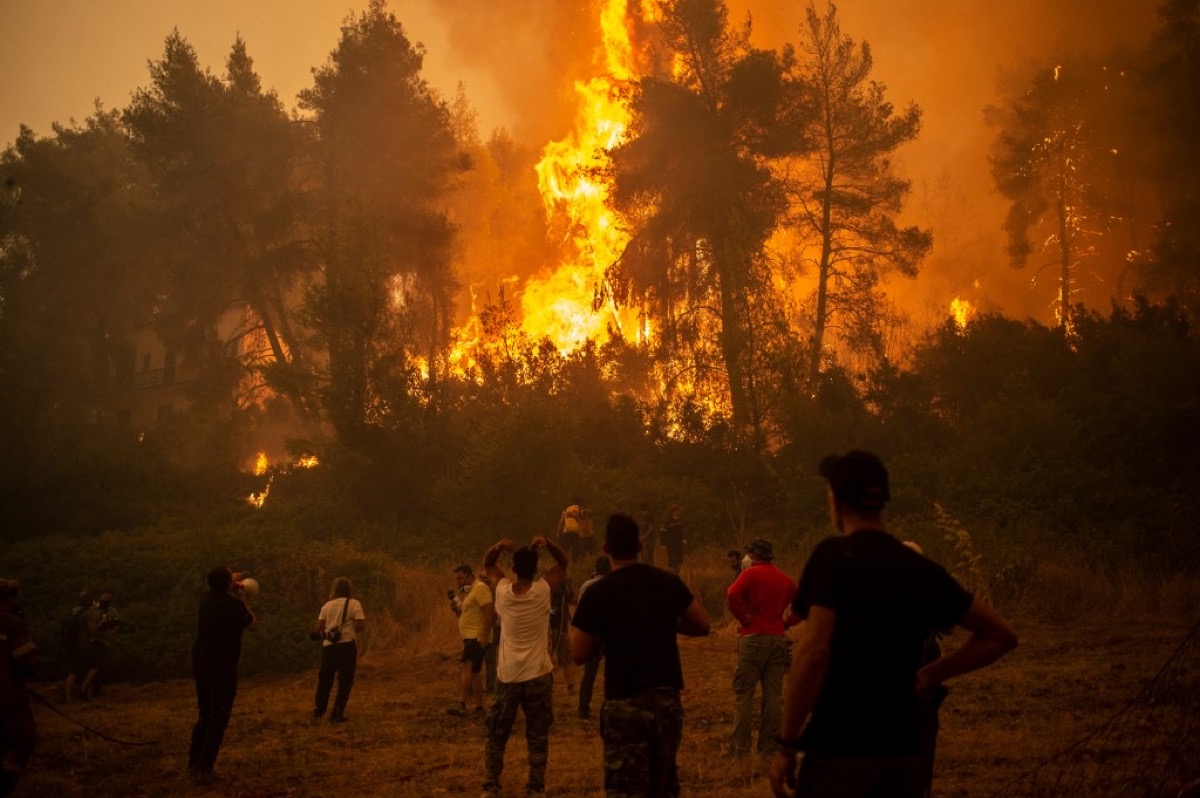 This Monday, the firefighters continued for the seventh consecutive day their fight against the Evia fire, 200 km east of Athens, where one after another, the towns in the north of this Greek island were besieged by flames.

If most of the fires stabilized or subsided in Greece on Monday, the disaster in Euboea, Greece’s second-largest island, remained the most worrisome, offering an apocalyptic outlook. Thick and suffocating fumes engulfed the coastal area of ​​Pefki this morning, from where hundreds of villagers were evacuated by sea, others continue to regroup.

The Greek Deputy Minister of Civil Protection, Nikos Hardalias, announced this Sunday “another difficult night” on the island of Evia, which has been ravaged by fires for seven days. In fact, in the absence of aerial means at night, firefighters fought until dawn in Monokarya, to prevent the fire from reaching the town of Istiaia, threatened by flames, according to the Greek Press Agency ANA.

One by one, dozens of towns besieged by fire were evacuated from their inhabitants as the flames engulfed the first houses. The villages of Kamatriades and Galatsades were to be the firefighters’ priorities on Monday. Because “if the fire goes through there, it will be in a thick forest and difficult to extinguish,” according to the firefighters cited by the ANA.

Among the 650 firefighters operating on the island on Monday morning, there are about 250 firefighters from Serbia and Romania, reinforced by 11 water pumps and helicopters, Civil Protection said. But air assets are experiencing “serious difficulties” due to turbulence, thick smoke and limited visibility, Hardalias said Sunday.

Giorgos Kelaïtzidis, deputy governor of Euboea, denounced, like many others, “insufficient” forces while “the situation is critical” on the island. According to him, at least 35,000 hectares and hundreds of houses have burned down. Greece has been going through a wave of violent fires for almost two weeks, fueled by drought and scorching temperatures, which have left two dead and dozens injured in hospital.

At the gates of Athens, the disaster that destroyed dozens of homes and businesses had been in remission since Sunday, but “the danger of a resurgence is high,” warned Hardals. Many ground forces continued Monday morning to fight the sparks at the foot of Mount Parnes, notably units from Israel, but also from Cyprus and France as part of the European fire aid system, according to firefighters.

A fire in Crete was brought under control, while the situation stabilized in the Peloponnese, but more than 300 firefighters remained on Monday morning, according to authorities. More than 56,000 hectares have been devastated in the last ten days in Greece, according to the European Forest Fire Information System (EFFIS). Some 1,700 hectares were burned on average during the same period between 2008 and 2020.