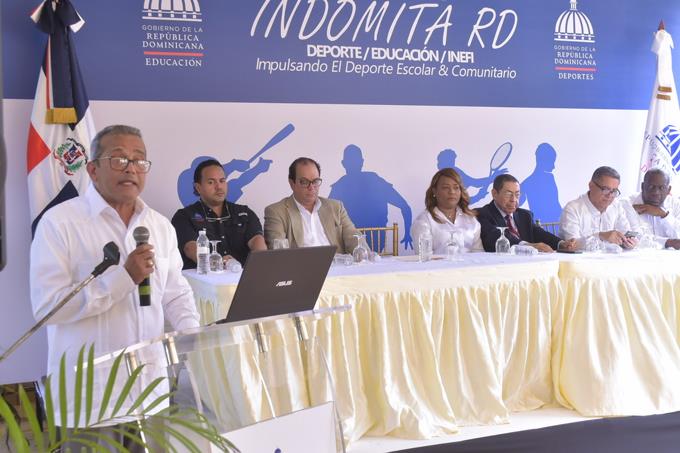 The Dominican Government announced this Thursday the start of the Indómita RD project in a pilot plan that will have the province of San Pedro de Macoris as its starting point.

The coordination of the project is in charge of the Ministries of Sports and Education, and the National Institute of Physical Education (INEFI), entities that organized a press conference in the Olympic Village of the Sultana del Este Sports Complex.

The Vice Minister of Sports Juan Vila, representing Minister Francisco Camacho, was in charge and gave the central words of the act, in addition to reading the Declaration of San Pedro de Macoris on the Indómita RD project, which is a State initiative to promote the School Sports and Community Sports throughout the country, through millions of children and adolescents, both male and female, in more than 10 public and private schools throughout the country.

Vila declared that one of the primary objectives of Indómita RD is to promote the psychomotor development of students, promoting in schools and colleges the creation of School Sports Clubs in eight disciplines such as chess, martial arts, basketball, volleyball, baseball, soccer, table tennis and athletics.

Likewise, he pointed out that “at the international level they will promote the participation of school champions each year in the eight curricular sports selected in competitions with champions from other countries such as the United States and the Dominican Diaspora.

Along with Vila at the main table were different authorities such as Aracelis Villanueva, Provincial Governor of San Pedro de Macoris; Isidro Santana, regional director of Education; Alonzo Ortiz, representative of INEFI; José Ovalle, coordinator of the Indómita program for the Ministry of Sports; and Santiago Valverde, representative of the private sector.

He said that “we will seek the integration in sport and physical activity of all citizens, boys and girls from schools and colleges to discover talents, and thus take them to high competition.”

These batsmen have scored at most double centuries in test matches between India and Australia, see