Earlier this week, Google officially announced that it would be introducing the Pixel 6 and Pixel 6 Pro on October 19. The information has also appeared on various social networks, and now it seems that we have more difficult information about the phones. UK retailer Carphone Warehouse has marketing material from the Pixel 6 and Pixel 6 Pro put online.

This shows that both devices will receive security updates from Google for five years, until 2026. That’s one more year than Samsung offers many of its phones. Samsung is very forward thinking in this area compared to the competition, but Google wants to go one step further according to the marketing information. The still featured Titan M2 security chip should help with this. In addition to this Titan M2 integrated into the system on a chip, the new Tensor-soc has a custom image processor with unknown properties, and the chip is up to 80% faster. 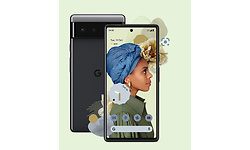 Battery capabilities aren’t mentioned, but the Pixel 6 should last two days on a full charge once you turn on Extreme Battery Saver. The Pro version should last more than 24 hours under normal circumstances (read: no battery saving), Google has measured an average of 34 hours. Both devices can be quickly charged with a power of 30 watts.

The Pixel 6 has two cameras that ‘have to capture more color, details and 150% more light’, one sensor actually has a resolution of 50 megapixels. The Pixel 6 Pro has a third 48-megapixel telephoto lens in addition to a 50MP and 12MP sensor. With an IP68 quality mark, they can also withstand splashing water and dust. Google will officially announce the devices on October 19.