Many DRM applications cannot handle the E-cores contained in the new Alder Lake processors, causing games to not launch or performance issues. Gigabyte’s tool disables these cores so that DRM checks can only be performed on the performance cores. 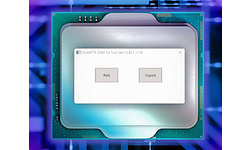 The Windows tool only works on motherboards with the 600 chipset and the latest BIOS and can be downloaded immediately from the Gigabyte website. The table below shows which motherboards are involved and which BIOS version you need at least.