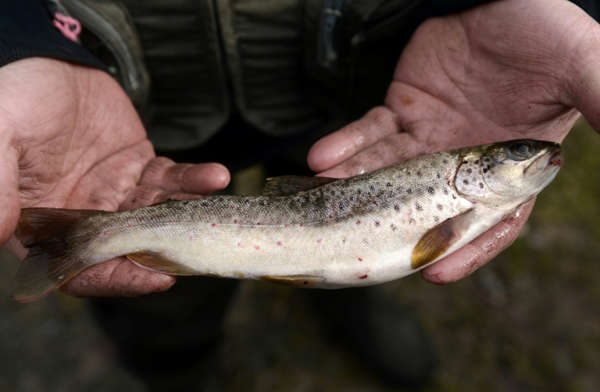 Wild-caught freshwater fish in the United States are far more contaminated with toxic perfluoroalkyl and polyfluoroalkyl “permanent chemicals” (PFAS). than those caught commercially in the oceans, with the highest levels found in Great Lakes fish, a new study suggests. analyze federal data.

The Environmental Working Group (EWG) peer-reviewed study also found that eating a serving of US freshwater fish contaminated with average levels of PFAS could be equivalent to drinking heavily contaminated water every day for a month.

Perfluoroalkyl and polyfluoroalkyl (PFAS) chemicals are a large family of synthetics, developed in the 1940s to resist moisture and heat. They are used in non-stick coatings, textiles or food product packaging.

“Widespread PFAS contamination of freshwater fish in the US is likely a significant source of exposure to PFOS and potentially others. [PFAS] for all people… especially for high frequency freshwater fish eaterswrote the study authors.

PFAS are a class of about 12,000 compounds, including PFOS, used to make water, stain, and heat resistant products. They are known as “permanent chemicals” because they don’t naturally break down and have been linked to cancer, high cholesterol, liver and kidney disease, fetal complications and other serious health problems.

The new study analyzed data from three studies conducted by the Environmental Protection Agency (EPA) and the Food and Drug Administration (FDA) at different time periods since 2013.

The EPA found that all but one of the 500 samples analyzed had elevated levels of PFAS. Farmed freshwater fish generally have significantly lower levels of PFAS than wild fish, which David Andrews, one of the study’s co-authors, said may be because farms use groundwater as a source to fill ponds rather than rivers. or polluted lakes.

The FDA has tested commercially caught fish purchased from supermarkets. The average levels of PFAS detected in wild fish from streams and rivers were 280 times higher than those sold in supermarkets.

The study authors note that the issue poses an especially challenging problem for low-income residents who cannot purchase fish from stores or groups that fish for cultural practices.

Despite the findings, the EPA and FDA have not warned consumers or fishermen about the dangers of eating what they catch. Fish warnings are typically issued at the state level and differ across the country, with most being based on outdated EPA health warnings that allow for much higher levels of chemicals than the revised levels issued this year.

The situation is “frustrating because there is no clear solution” in addition to eliminating any other sources of PFAS contamination, Andrews said. Lakes that do not renew their water regularly can remain contaminated for decades, he added.

“I don’t want to tell people not to fish because I love to fish, but I would recommend, if possible, that they avoid eating freshwater fish unless they have clear information that it is not contaminated, because this study indicates freshwater contamination. national sweetAndrews said.

What does the radome of an airplane hide?