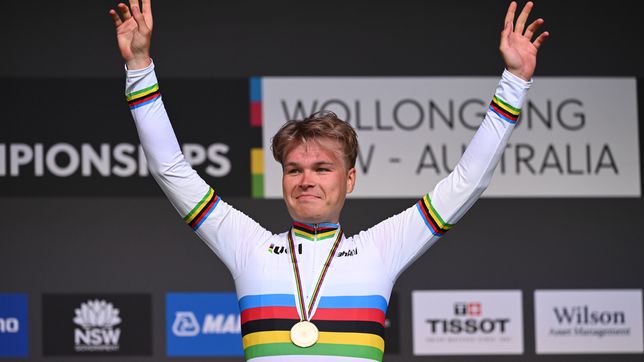 Tobias Foss has been one of the revelations of the 2022 season after becoming world time trial champion against all odds ahead of figures like Remco Evenepoel, Stefan Küng or Filippo Ganna.

However, in an interview with Eurosport Norway, Foss He analyzed that he believes that he still has to raise his level in one-week races rather than in grand tours. “I think we haven’t realized that we’ve accomplished a lot at once and that I’ve missed a couple of steps along the way. I think it would be nice to start from scratch, do some stage races to gain confidence. And after having this base, compete in a grand tour. After finishing ninth in the Giro last year, I am confident that I can handle it well and that I have the necessary skills. But I have to raise my level if I want to be Top-5 or fight for the podium”

Foss says that if he focuses on these one-week races it will allow him to gain confidence for the big tours. “I think it’s easier to grow if you don’t focus on the grand tours and if you do more races. Finishing several races in the top positions gives you confidence and settles you down a bit. I don’t think it’s stupid to do it. It’s the path I want to take now. Winning a grand tour is the dream goal and the dream you are working towards, but I think it is more likely to win a shorter stage race.”

Foss’s dream is to compete for the first time in the Tour de France, although he knows that he will not have opportunities to run as the leader, so he is also considering the option of competing in the Giro, where there will be up to three time trial stages. “I want to ride the Tour, but we are in dialogue with the team and there are very good cyclists in the team. It is unknown. I think in 2023 we will go on to win all the grand tours, so I shouldn’t expect opportunities for him to fight for a grand tour. Nevertheless, I am very motivated to be together with Roglic and Vingegaard and help them. But I still don’t know what grand lap I will run. I really like the Giro and being able to wear the time trial world champion jersey three times would be very nice”.

Foss has a contract until 2023 but does not yet know if he will continue with Jumbo-Visma after next season, as he admits that he will have few opportunities to fight for the grand tours. “I think the Jumbo-Visma team and riders have a great future and participating in this project is great, it’s a team I really enjoy. I would like to stay but if I want to lead a team in a Grand Tour, I have to realize that going to the Tour or the Giro and having my own opportunities will be difficult when there are such good leaders. We will see what results we achieve and we will talk to the team about what role they want me to have, what I have to contribute and what they see in me for the future. I think we’ll get a good deal.”

When Shahrukh and John fought in Dubai, how was Pathan’s action sequence filmed? video popped up