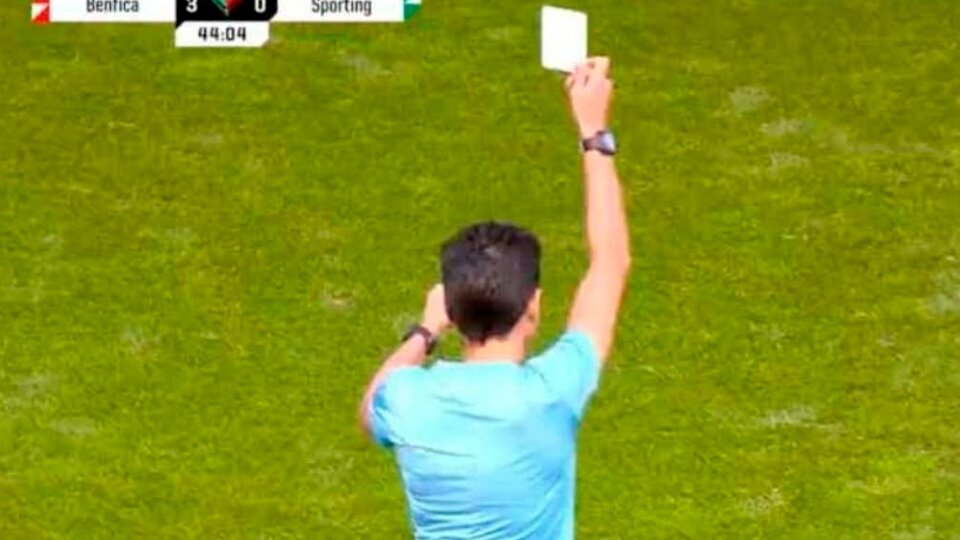 The women’s classic of Portugal between the Benfica and Sporting Lisbon marked a milestone in the history of football: during that match the use of the white card was released. This new cardboard was added to the already known red and yellow, established since 1970. But, what it is, what it is for and in what situations it is used.

The person responsible for getting the white card in professional football was Catarina Branco, who refereed the match between Benfica and Sporting Lisboncorresponding to the Portuguese Women’s Soccer Cup and which ended with a resounding 5-0 win for the locals.

The clock showed 44 minutes into the first half, when the referee stopped the game to put her hand in the pocket of her shirt and take out the card to show it to the medical staff of both teams, after which they rushed to assist a fan who had passed out in the stands.

The intention of the judge was reward “ethical value in sport” and received an ovation from the more than 15,000 spectators who attended the Da Luz Stadium.

As explained by the Portuguese media to ball, “The white card is a pedagogical resource that aims to extol ethically correct conduct, practiced by athletes, coaches, managers, the public and other sports agents”. This is definitely in contrast to the yellow and red ones used to discipline players for misconduct.

At the moment, it is used only in Portugal, and it is part of an initiative of the National Plan for Ethics in Sport to promote fair play, adopted by the Portuguese Football Federation.

There is no authorization from FIFA or the IFAB (International Football Association Board) for global and mandatory use in the rest of the world.

In addition to the debate on the use of the white card, FIFA has in mind four new rules to put into football, that would give a 180 degree turn to the sport. He even started some of them in the youth tournament Future of Football Cupin which the under-19 teams from Bruges, AZ, PSV Eindhoven and RB Leipzig participate.

At the end of the tournament, FIFA will analyze the impact of these new implementations and, if satisfied, will ask the International Board, which sets the rules of the game, to add them to its regulations.

United Kingdom: the health system faces the biggest strike in its history

Pride will defeat Osasuna in the Cup