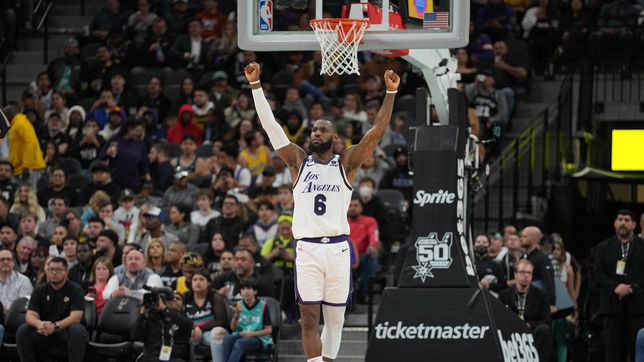 The Lakers’ start to the season has been so horrible that even after four wins in five games (last in San Antonio, 94-105where they repeat duel with the Spurs tonight) They are still very far from the 50% of wins (6-11) and from the positions of play in of a diffuse West (They are now three wins away: the road is still steep.) The inaction of the summer continues to plague a team that recovered LeBron James after five games of absence (his already recurring groin problems, infirmities of age) and is seeing how the best version of Anthony Davis in a long time marries with the excellent level of Myles Turner and Buddy Hield in Indiana Pacers so that Los Angeles fans live in a permanent what if: what could have been and (for now) is not…

At least the Lakers, in a tamer stretch of the schedule, are going scratching victories. The one from San Antonio was also the first at home after six defeats. No matter how you look at it, for this team, so unstitched just a few weeks ago, it’s a huge stride to win four out of five, and the grade rise could be a bit stronger if they repeat tonight, again against some Spurs in free fall: 6-14, seven straight defeats and twelve in thirteen games after a start in mirage format:5-2. Gregg Popovich’s men started the year thinking about rebuilding. And that is definitely where they are, especially if there are possible exits in the winter market (all eyes on Poeltl). Reconstruction in French, by the way, It’s called Victor Wembanyama.

With the return of LeBron, who started without rhythm and accumulating losses (9 in total, almost all in a bad first half), Darvin Ham readjusted the quintet again and tried something similar to the best that the Lakers can offer now (even if Patrick Beverley were suspended): Dennis Schröder, Lonnie Walker, LeBron, Davis and Troy Brown. In a good first half, the lead reached twenty points (59-39), but the usual problems in the third quarter (34-20 with an 8-0 run in the last 3:44) forced the Lakers into a new effort. They did it: 0-11 to calm the waters in the last set (from 78-81 to 78-92). Davis and LeBron, with Austin Reaves doing a bit of everything, put the direct against a rival who falls as soon as they blow him a little. Davis finished with 25 points, 15 rebounds, 4 assists and 3 blocks. He continues at a splendid level, also with fewer shots (10/13 this time) at your service. LeBron shook off the rust and finished with 21 points, 8 rebounds and 5 assists. Walker added 18 points, Nunn 9 and Reaves 8 on a discreet day for Russell Westbrook (1/7 on shots, 3+4+7), who is hardly talked about anymore (which is not little) and who at least helped in his minutes for the team to play fast and generate easy points in transition.

The Spurs were a rival meek, little unruly. Sochan finished with 13 points, 9 rebounds, 5 assists and 4 steals. The rookie is a good player project. Keldon Johnson had 13 points, Poeltl 10, Vassell 18 and Tre Jones 19 with 5 assists. After their bluff at the start of the season, the Spurs are approaching the place they seemed destined to occupy by design, with all the senses put (of course, in the offices) in the next season. whatand the lakers? Better. Without throwing rockets, but better. Stabilized, more structured and less frustrating. Far from competitive relevance and condemned, if nothing on the table continues to move, to continue playing the game with an eye on Rob Pelinka and the Indiana Pacers: on Myles Turner and Buddy Hield. The what if. At least they avoided the 0-7 at home. Something is something, isn’t it? Well that.