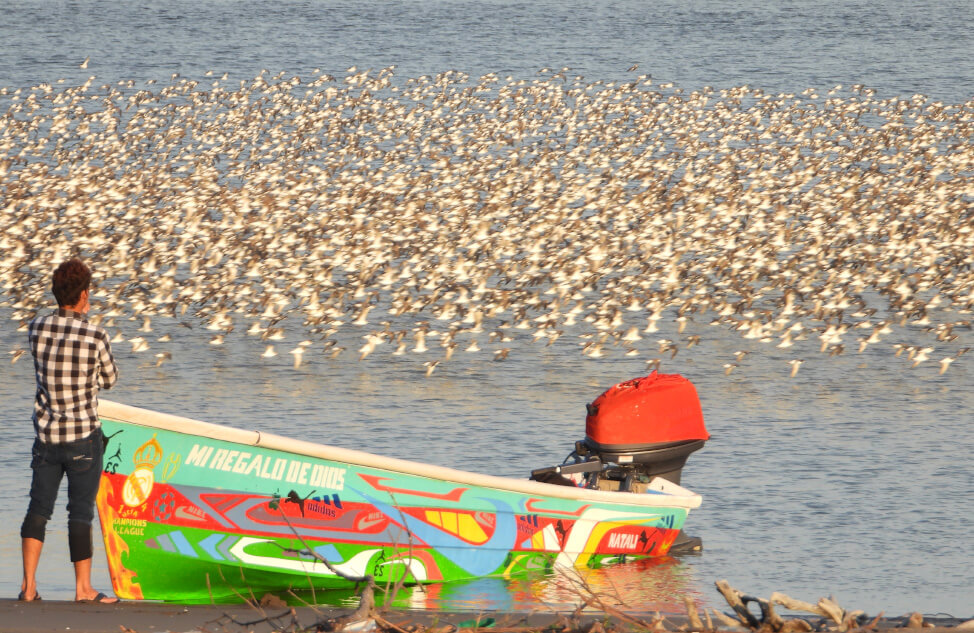 “It’s better in a flock”, is a story of collaboration for shorebirds within the project “Habitat conservation initiatives in the Punta Condega-Jicarito System Shorebird Reserve: safe places for shorebirds in Honduras”

We took a boat in the community of Guapinol and headed towards the Gulf of Fonseca, where Punta Condega is located in Honduras. With almost perfect timing, we reached the Gulf just as the tide was rising and covering the muddy plains and flocks of shorebirds were flying to their roosts. The emotion took over the group and even the community guide told us: this is the perfect time to be here.

Flocks of thousands of birds passed in front of us as we were on the boat. We thought that the flock was going to land on the small beach that forms in Punta Condega, but when we arrived we realized that they didn’t stop there, they kept flying, moving away from their feeding place. Based on the route of origin of the birds, we suspect that they feed on the muddy plains at the mouth of the Choluteca River.

We are doing the first sampling of shorebirds in natural habitats and shrimp farms under the project “Habitat conservation initiatives in the Punta Condega-Jicarito System shorebird reserve: safe places for shorebirds in Honduras” of the trainee at Onil Rodríguez Coastal Solutions. The group is formed in this sampling by six people, from organizations and groups that collaborate with the project: Executive Secretariat of the Hemispheric Network of Reserves for Coastal Birds WHSRN / WHSRN – Manomet, Institute of Forest Conservation (ICF), Aves Honduras, Shrimp companies, fishermen and the Flora and Fauna Defense and Development Commission of the Gulf of Fonseca.

Not knowing where the large flock that crossed us was flying, we divided into two groups, to locate it. One group walked along the beach and the other group, which I was in, got back on the boat and we also headed to Playa Venado at the Olive Ridley Turtle research center and straight ahead, to a small beach on Estero el Dorado, we found the herd already in your rest time.

These areas are part of the Punta Condega-Jicarito System, recently designated by the Institute for Forest Conservation (ICF) to be part of the Hemispheric Network of Coastal Bird Reserves as a reserve of Regional Importance. The system is part of a set of areas that provide feeding grounds for shorebirds, usually located on muddy plains, and resting areas that include beaches, shrimp farms and mangroves. This area offers the opportunity to work with fishermen both in coastal areas, such as salt flats or beaches, as well as with shrimp companies and protected areas under the co-manager’s administration.

For Onil Rodríguez, this collaboration with Manomet is a “win-win”, as it allows him to learn and obtain experience from specialists in the subject of shorebirds and, in turn, the project contributes to the generation of necessary information for the Golfo de Fonseca on the Honduran side. It has been a synergy that allows us to fulfill Coastal Solutions’ objectives and support the work of ICF.

Also during these first two surveys, part of the Quetzalli Nicaragua team monitored bird counts, sharing lessons learned and generated over the past six years at the WHSRN/WHSRN Delta del Estero Real site in Nicaragua, which is part of the Gulf of Fonseca. , making networking a reality through the exchange of experiences.

So far, project collaborators have managed, with the support of the National Association of Aquaculturists of Honduras (ANDAH) and other actors, to involve three shrimp companies, Grupo Granjas Marinas, Seajoy, ICASUR and El Faro, where they carried out the first counts of birds and the documentation of practices that may favor these shorebirds. Counts were also carried out in habitat management areas by species in Punta Condega, Jicarito and Barbería. The counts will be extended into January-February and later into the migration season, generating important information about shorebird feeding and resting places.

In these first two samplings, the importance of the Punta Condega-Jicarito System was demonstrated and the needs of its resting places were documented, including the need to carry out cleaning campaigns on the beach, reserving resting places within the shrimp farms and management of natural salt pans to maintain safe places for shorebirds.