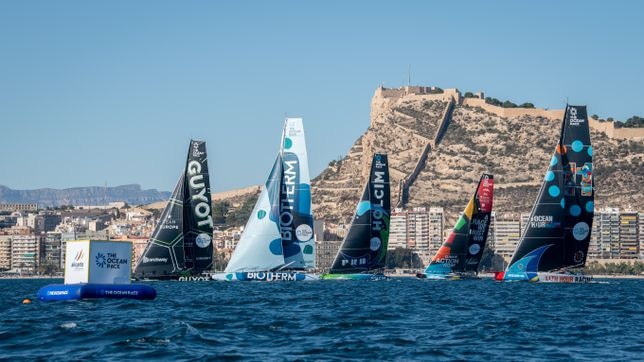 There is already a nautical competition atmosphere in Alicante. The 14th edition of The Ocean Race It will start this Sunday and on the jetties of the Marina and in the Ocean Live Park there is a constant trickle of sailing fans. There is desire and, in addition, it offers the possibility of seeing up close the five IMOCAs and six VO65 one-designs that they will take the exit. They are a great attraction and it is that These 11 ships from nine nations (there are none Spanish) are only two days away from starting the world tour.

The Ocean Race has opted, in this edition, for divide the competition into two classes: the IMOCA fleet, with five teams that will go around the world with the aim of winning The Ocean Race Trophy; and the VO65 fleet. In the latter there will be six boats and they will compete in three stages (Alicante-Cape Verde; Aarhus-The Hague; and The Hague-Genoa) to lift the The Ocean Race VO65 Sprint Cup. The winner will be the one who accumulates the best score in these three sections that will have a distance of 4,855 nautical miles (8,996 km).

The IMOCAhave traditionally been known for their solo or team regattas, but in this edition of The Ocean Race will compete with a mixed crew of four or five sailors. This class uses a development design rule that allows designers to experiment with hull and sail shapes within set parameters. Nevertheless, the masts, booms and standing rigging are of unique design. They do have retractable foils, as the rules allow their use, and it does increase performance by raising the boat partially out of the water. IMOCAs are 60-foot (18.3-meter) monohull boats built in carbon and capable of covering more than 600 nautical miles in 24 hours. American 11th hour Racing Team; GUYOT Environnement – ​​Franco-German Team Europe; German Team Malizia; French Biotherm Racing; and Swiss Holcim – PRB are the ones that will be at the starting line and the ones that will try to go around the world.

And on the other hand, there will be the six VO65, which is the type of boat that has been used in the last two editions of The Ocean Race. These are one design, identical case and sail design, so the competition is very even. In the open sea they are fast thanks to having a large sail area together with a pivoting keel. They are 65 feet (20 meters) and will compete with mixed-sex crews of a minimum of seven sailors. Austria Ocean Race-Genoa; Team Jajo; Ambersail 2; Wind Wisper Racing Team; Long live Mexico; and Mirpuri Foundation Racing Team will be up and running for The Ocean Race VO65 Sprint Cup.

Bitcoin could drop to $15,000 if the Fed doesn’t adjust its policy