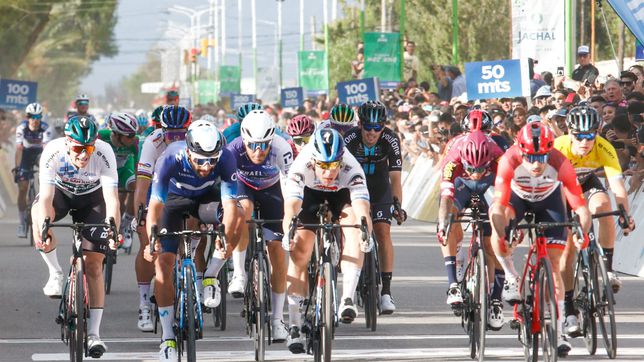 A stage of 201 kilometers that was defined in the last meters in a good packing that in the end went to Fabio Jakobsen from Soudal Quickstep. In second place was the Colombian Fernando Gaviria and in third place the Spanish Jon Aberasturi from Trek Segafredo. San Bennet, winner of the first stage, was fifth.

The stage remained calm throughout the entire route, after experiencing wear and tear, crashes and complaining that some sections were dangerous in the first fraction, the road on Monday was lived without surprises. There were a couple of leaks that, as expected, didn’t alter the finale and it settled in neat packaging.

Before reaching the last few meters, the teams of the favorites were in the first places of the main group to avoid being involved in crashes and two of the most active pulling the peloton were Egan Bernal and Remco Evenepoel, two of the favorites for the title. Both the Colombian and the Belgian sacrificed and were aware of their squads.

Remco worked a little more, because in the end he was part of the Soudal package that ended up giving Jakobsen the victory. Both he and Morkov, the best pitcher in the world, were impeccable in the pitch to their teammate who is in San Juan for the first time.

Fernando Gaviria was second in the stage

Fernando Gaviria did a very good packing. The Movistar Team rider does not have a train in the Spanish team, but he knew how to take advantage of Soudal’s with intelligence. Gaviria was always located behind Morkov, he looked for the space of the Bora runner who launched Bennet and astutely understood the last movement.

In the end, he could not beat Jakobsen in strength, who had a pitcher and was a few centimeters ahead of him, but your packing was correct and it showed that the legs are still there. At the finish line, the Colombian celebrated with the Dutchman.

Third stage of the Vuelta a San Juan

The third stage of the Vuelta a San Juan will begin and end at the Villicum Autodrome, will have 170 kilometers. The route is mostly flat, but it has two slopes.

The first, a third-category mountain prize located at kilometer 62.5 in El Cerrillo and the other uncategorized six kilometers before the finish line at the racetrack. It can be for runners like Higuita, Matthews and also for packers.