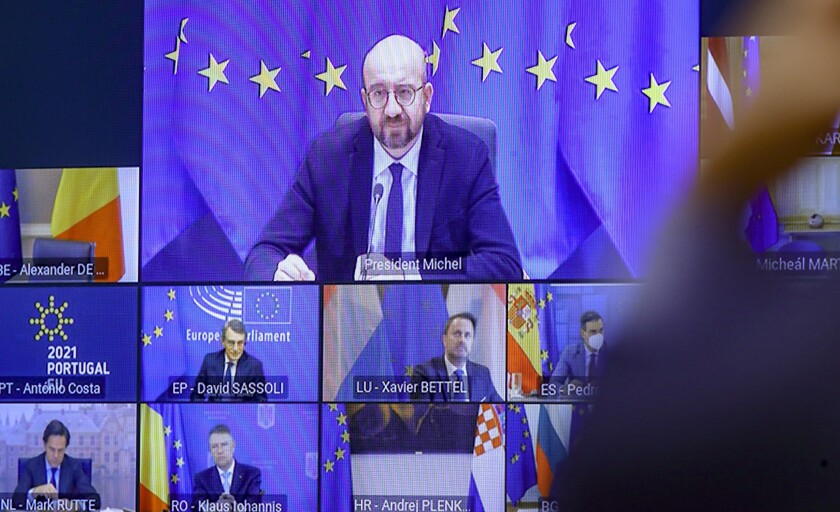 It is too early to let your guard down. European leaders at the summit on Thursday asked to “maintain firm restrictions” while speeding up campaigns to vaccination stop coronavirus variants, but did not resolve their differences over the future “vaccine passport.”

“The epidemiological situation remains serious and the new variants present additional challenges. We must therefore maintain firm restrictions while intensifying our efforts “to speed up vaccination, the Twenty-Seven said in their conclusions after a video conference summit.

While the increase in British and South African variants raises the specter of new outbreaks of contamination across the continent, vaccination campaigns remain slow, still penalized by significant delays in deliveries.

“The coming weeks will continue to be difficult in the field of vaccination”, acknowledged the President of the European Council Charles Michel, during a press conference. “But I would like to send a message of optimism. We have the means to ensure that the EU plays a key role in coming out of this crisis in the coming months,” he added.

The European Commission has pledged a huge increase in the doses available in the second quarter – with Pfizer/BioNTech and Moderna’s deliveries significantly increased, Johnson & Johnson’s vaccine approval and strict supervision to resolve production line failures.

Charles Michel also called for “improving the sequencing capabilities” of the virus to quickly identify its mutations – a complex procedure performed irregularly in the Union, but for which Brussels has released funds. Concerned about pressure for variants, about ten EU states have restricted the crossing of their borders. The Commission called on six of them, including Belgium and Germany, to explain the restrictions it considers disproportionate, fearing the disruption of production chains.

France, for its part, announced on Thursday that it will require recent PCR tests for non-professional travel by cross-border workers from Germany to the Moselle. The 27 initially promised to adopt only “proportional” and “non-discriminatory” measures. But the variants have changed the situation, prompting some governments to close their borders.

As for the issuance of a European vaccination certificate to facilitate travel, the leaders were satisfied with their conclusions with “calling for a common approach”.

“There are still scientific issues: it is not yet certain that you will stop transmitting the virus after you have been vaccinated,” argued Commission President Ursula von der Leyen. The issue of the rights inherent in this “passport” was considered “conflicting” and “irrelevant” by some Member States, at a time when only 4.2% of Europeans had received at least one dose of the vaccine.

Paris and Berlin consider the issue premature, rejecting any inequality of treatment between a privileged minority and the others. But other states – especially those more dependent on tourism – want accelerated adoption to save their summer season, like Greece, which, like Cyprus, has already struck a tourism deal with Israel.

Supported by Bulgaria, Austrian Chancellor Sebastian Kurz defended him “a green passport” that allows travel or access to restaurants, for vaccinated people, but also for those considered “immune” after contracting the virus.

The 27 finally entrusted the Commission with the task of drawing up the technical conditions for a vaccination certificate (element to be taken into account, IT support, interoperability, etc.). The European executive “will need three months to achieve this” German Chancellor, Angela Merkel stressed to the press, assuring that after its implementation, “this does not mean that only holders of vaccination passports will be able to travel”.

Popular will support CRESO athletes with its Wellness Center