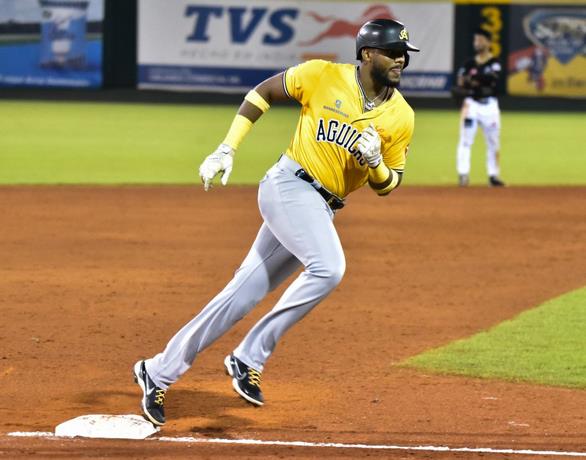 Jerar Encarnación’s three-run home run was the decisive hit for the Águilas Cibaeñas to achieve their tenth victory on the road by beating the Gigantes del Cibao 4-3 this Wednesday to remain in first position in the 2022-23 championship dedicated to the memory of Tomás Troncoso.

With their victory, the Eagles place their overall record at 24-10, now 10-7 away from home and 14-3 at home, while the Giants have a total record of 16-17, in their dispute for third place in the tournament. .

The Giants got up early against the eaglet starter Roenis Elías, making two scores in the first episode as a result of a home run by first baseman Henry Urrutia with José Sirí in circulation who had negotiated a transfer and had moved to second base due to Tito Polo’s sacrifice bunt.

While the Eagles erased the two-run advantage of the Giants making a cluster of four scores in the fifth chapter taking advantage of the departure of Yordy Cabrera, who had silenced the eaglet bats the first four chapters.

Cabrera, an emergency starter, who was making his debut with the Giants to replace the announced Cristopher Crisóstomo, left without a decision when he left the box after facing 16 batters, without allowing a hit or a run, although he did grant four walks with one strikeout.

The Águilas immediately attacked reliever Luis Santos, who had gotten two outs after a hit by catcher Julio E. Rodríguez, allowed back-to-back singles by Yairo Muñoz and Orlando Calixte, who drove in Rodríguez from second for the Aguilucha first round.

A home run through the center field by fourth hitter Jerar Encarnación, with Muñoz and Calixte in circulation, was the decisive hit to put the Águilas ahead 4-2, who never again lost the advantage.

The Giants closed within within in the eighth, scoring one run after two outs off reliever Francis Martes, who replaced starter Elías. Transfer to José Sirí, who stole second and stepped on the pentagon for indisputable center Polo.

Elías (2-0), obtained the victory by working in 7.0 innings in which he faced 25 batters with four hits and two runs, gave up two tickets and struck out eight opponents. Then they paraded through the box Tuesday (8), Darío Álvarez (8) and Rodríguez (9), who earned his tenth save of the season to continue leading the league.

Encarnación led the Aguilucha offense by hitting a homer and a single, with three RBIs and one run scored, Rodríguez hit a couple of singles, Víctor Robles, Muñoz, Calixte and Torres, one hit each. Muñoz extended his chain of matches to ten by connecting undisputed.