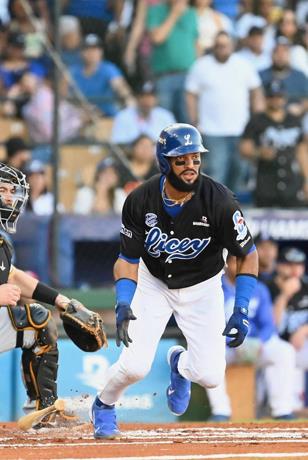 Emilio Bonifacio and his extraordinary staging during the 2022-2023 championship postseason had another reward: Round Robin Most Valuable Player presented by Pizza Hut.

The Professional Baseball League of the Dominican Republic (LIDOM) announced this Thursday the selection of the Tigres del Licey outfielder, who received 46 votes cast by the jury made up of 69 communicators nationwide.

Gustavo Núñez, also of the Stars, and the designated hitter of the Tigers, Jorge Alfaro, were favored with three ballots each. Andy Otero, a pitcher for the San Pedro de Macorís-based team, got two votes and his teammate, lanky first baseman Lewin Díaz, appeared on a ballot.

LIDOM and Pizza Hut will present Bonifacio with a trophy as well as a cash prize during a ceremony before the third game of the Final Series this Sunday at the Quisqueya Juan Marichal stadium.

Bonifacio led the Round Robin of the championship dedicated to the memory of the communicator Don Tomás Troncoso and in option to the Banreservas Cup in the boxes of runs scored (16), towed (13), triples (3), stolen bases (5) and was second in shifts (66) and doubles (5). He had 20 hits and batted .306 while playing impressive defense in center field.

The Tigers advanced to the Final Series with a 10-6 mark, the same record as the Estrellas, their rival in the last instance of the championship, to bring about the conclusion of this phase in 16 dates.

Norway is Spain’s rival in the quarterfinals

The Netherlands has a new exchange; and it is also the cheapest