The strongest growth in the last 24 hours with an increase of more than 20% of its price, the EGLD token of Elrond is approaching the symbolic bar of 10 billion dollars of marketcap.

Up 50% over the last 7 days, the EGLD token could definitely take off. As some crypto players have been predicting for several months now. Focus today on the explanations of this increase and its potential in the longer term.

The following chart, visible on the CoinMarketCap platform, shows Elrond’s price over the last 7 days. 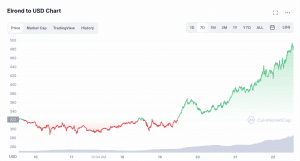 Graphically, we observe that the token has experienced a very strong rise, similar to what we currently find on the price of the Avalanche token (AVAX). In the space of 7 days, the token has just gone from a price of 322 dollars to over 488 dollars an hour as we write these lines. Or an increase of 51%. An increase that even rises to 60% over the last 3 days. For a project whose marketcap was already over 5 billion, such an increase is rare enough to be noted. So how do you explain it?

This increase in the price of the EGLD token is directly linked to the establishment of the Maiar exchange, at the heart of the Elrond protocol. While it has only been available for a few days, the exchange already has a very high TVL (Total Value Locked). At the time of writing, more than $ 1.6 billion is believed to be stuck in the protocol. By comparison, the TVL was less than $ 100 million 3 days ago, on November 19.

Good to know : TVL is a good indicator of investor confidence in a project. Indeed, a TVL level helps to anchor a project more firmly and avoids as much as possible the strong fluctuations linked to massive resales of tokens.

The enthusiasm and confidence around the Maiar project strongly contributes to explain the rise of the EGLD token of Elrond. For investors, it will therefore be necessary to monitor the evolution of the TVL around the Maiar exchange.

Elrond Wants To Accelerate Adoption Of Its DEX And ​​Ecosystem

In order for Maiar to be widely adopted, Elrond recently rolled out a very richly endowed incentive program. With $ 1.3 billion that will be distributed to users of the exchange. The goal is to anchor the use of Maiar among users. A massive adoption that could ultimately be to the detriment of other exchanges. This ambitious incentive program is neither more nor less than the largest in the history of DeFi. With great remedies, therefore with great means. For comparison, Binance recently deployed $ 1 billion for the development of the BSC, while Fantom has invested an amount close to $ 400 million to develop its ecosystem.

The rewards granted to those who feed the liquidity pools will be granted by MEX tokens. Among these 1.3 billion dollars, nearly 300 million should also be distributed in the first month alone. After this first month, Elrond intends to deploy a new campaign. A campaign for users of exchanges like Uniswap or Pancakeswap who will then be able to claim an airdrop of MEX tokens. An airdrop, the amount of which will be proportional to the activity on the said platforms.

What about the Predictions? 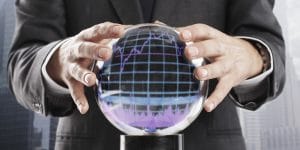 Recently we told you about Elrond as a project potentially capable of killing Ethereum. Proof of the enthusiasm for this project. For many observers, the price of the EGLD token could take off beyond the $ 1,000 mark in the near future.

Based on the different prediction algorithms, everything looks pretty positive for Elrond. Thereby, DigitalCoinPrice estimates that a token could exceed $ 1,000 by 2023. For their part, the models of WalletInvestor expect a token close to $ 700 within 12 months and a price of over $ 1,500 within 5 years. The bell sound is the same for TradingBeasts which expects an EGLD which could still appreciate by 30% over the next 12 months. If these forecasts are to be taken with a grain of salt, it would appear that a form of bullish consensus is emerging for EGLD.

Growth: the Omicron variant worries the IMF which could revise its forecasts

Amazon Ligue 1: The best plan to follow the weekend matches on Prime Video

Samsung: Galaxy Tab A7 at a discount as Christmas approaches

Bitcoin Drops Below $42K, Is This the Beginning of the Bear Market?

Prices, features … everything you need to know about Lidl’s Monsieur Cuisine Smart on sale this Monday

Growth: the Omicron variant worries the IMF which could revise its...

Hamilton, leads the first practice of the GP of Saudi Arabia