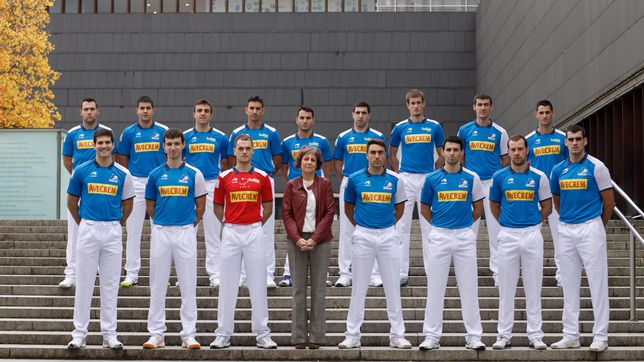 With the Cuatro y Medio finished with the rise of Ezkurdia, a new championship arrives, the Couples, whose final will be held on April 2 at the Navarra Arena fronton. Eight duets will compete for the prized txapelas in a very long competition, lasting more than four months. It will be the first time that the Foral Community hosts the last match of a championship that begins this Friday in Azkoitia at 10:15 p.m. with the clash between Ezkurdia-Martija and Etxeberria-Rezusta.

A total of 16 pelotaris divided into 8 pairs will try to collect a trophy that Altuna or Martija, current champions, will try to revalidate, but this time separately. The competition system will be a double round league among all. After her, there will be a play-off and a group of semifinals between the best four before the grand final. The presentation of the tournament in Baluarte was attended by the Minister of Culture and Sports, Rebeca Esnaola; the commercial director of Baiko, Unai Iglesias; the commercial manager of Aspe Pelota, Inaxio Errandonea; and the representative of the League of Companies, Borja Osés.

The pairings for Aspe will be Altuna III-Tolosa, Elordi-Zabaleta, Etxeberria-Rezusta and Ezkurdia-Martija, the latter pairing being the one that will attract the most attention a priori. Baiko will have Laso and Imaz, runners-up last year, as their main weapon to face their rival. Peña-Mariezkurrena, Urrutikoetxea-Albisu and Jaka-Aranguren complete the final list.

“The Arena has established itself as a space for finals and we know the satisfaction of the companies with this facility and with its sporting and social possibilities”, Esnaola stated about the choice of this venue to host the match. Borja Osés has affirmed that “the excellent response of the pelotazales has made it absolutely possible for this agreement to crystallize and be extended” during the next seasons.

“Until the last moment we have had many doubts since very important pelotaris have been left out, but we have thought it appropriate to provide news due to the merits acquired by the new starters,” Errandonea explained about the absences of Irribarria and Elezkano and the entries of Etxeberrria and Elordi. In addition, the final phase of the Masters Championship, which will be held on September 29, the semifinals and the final, will also be at the Navarra Arena.

Main priorities for the digital commerce sector in 2023