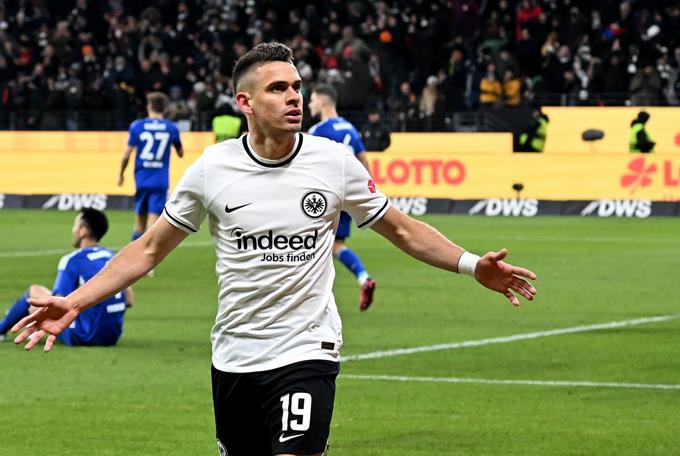 The striker from Barranquilla, formerly of River Plate among others, sealed the victory against Schalke with a goal in the 84th minute, minutes before the Angolan Aurelio Buta rounded off the win in discount (90+1).

The path to victory was opened by the Swede Jesper Lindstrom with a goal in the first half (22), to sink Schalke a little more, which closes the table with only 9 points in 16 games and is 6 points from the safety zone .

Eintracht didn’t play their best game, they didn’t even dominate in many moments of the match against Schalke, but they were extremely effective in front of goal.

The locals also had a great Kevin Trapp, author of several saves in the first half, before Schalke sank in the second period.

The current champion of the Europa League, adds 30 points and is placed second. They are tied on points with Unión Berlin, who defeated Hoffenheim 3-1 (12th) and Freiburg (4th), who left the provisional podium after being thrashed on their visit to Wolfsburg (6th).

These three teams are 5 points behind the leader Bayern Munich, who drew 1-1 on Friday in their visit to RB Leipzig (5th with 29 points) in the resumption of the Bundesliga after the break for the World Cup and the traditional winter truce.

– Wins by Wolfsburg and Cologne – With these results, the Bavarian team is already assured of finishing as ‘winter champion’ for the 26th time in its history, an honorary title that in most cases (40 of 59 in the Bundesliga) is synonymous with win the championship.

Bayern and Eintracht will meet next week at the Allianz Arena in Munich in the star clash of the 18th round of the Bundesliga, which will allow us to measure whether the Frankfurt team is capable of standing up to the almighty ‘rekordmeister’ in the fight for the title .

In Wolfsburg, Patrick Wimmer (1), Jonas Wind (27, 37), Yannick Gerhardt (56), Ridle Baku (81), Gian-Luca Waldschmidt (90+5 penalty) were the authors of the home team’s goals, which In this way, the Champions League positions are approaching.

Freiburg was not the only team that was thrashed resoundingly, since in the last game on Saturday, Werder Bremen (9th) lost 7-1 in their visit to Cologne (10th), which was already winning 5-0 in the minute 36 of the game.

In the fight for permanence, Bochum (14th) achieved an important victory (3-1) against Hertha Berlin (17th) and Stuttgart (16th) and Mainz (10th) tied at one goal.

The matches of the two Borussias remain for Sunday, Dortmund (7th) and Mönchengladbach (8th), which will host Augsburg (15th) and Bayer Leverkusen (11th) respectively.