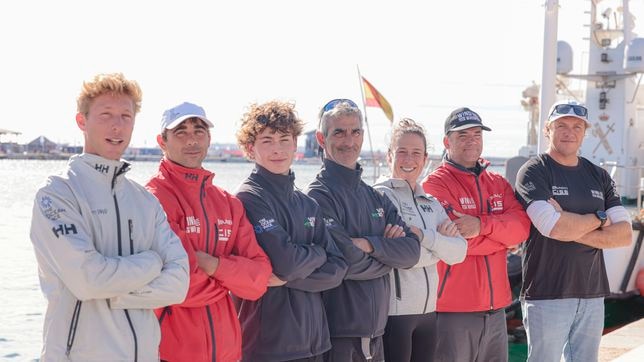 This Sunday starts the The Ocean Race and in Alicante, with the passing of the hours, the expectation increases. The teams have already made the pontoons their own and, this Monday, the presentation of the eight Spanish sailors who are going to compete in this editionboth in the IMOCA class and in the VO65. There is no Spanish team, but the country will be represented by Támara Echegoyen, Pablo Arrarte, Willy Altadill, Antonio ‘Ñeti’ Cuervas-Mons, ‘Chuny’ Bermúdez de Castro, Carlos Bermúdez de Castro, Jaime Arbones and Simbad Quiroga.

Of all of them, the only one that will compete in the IMOCA class (monohulls of 18.30 meters in length with foils) will be Támara Echegoyen, which will sail in the GUYOT environment-Team Europe. The rest of the Spaniards will go with the VO65: Pablo Arrarte, Willy Altadill and Antonio ‘Ñeti’ Cuervas-Mons, with the WindWhisper Racing Team; ‘Chuny’ Bermúdez de Castro, Carlos Bermúdez de Castro and Jaime Arbones, with Viva México; and Simbad Quiroga, in Team JAJO. As to Echegoyen, will be his second experience after experiencing the 2017-18 edition aboard MAPFRE and, in addition, she will use it to continue with her preparation for the Paris 2024 Games: “I am very lucky for the possibility of being in this project, I come to learn on the boats with foils and make the most of it. I want to thank my partner Paula Barceló for adapting her calendar so that we can continue with our Olympic campaign for Paris 2024 ″.

After her, he took the floor Pablo Arrarte, who is one of the best rods in the world in extreme conditions. It will be his first time as a skipper leading the WindWhisper and the sensations couldn’t be better because last Sunday he won the In-Port regatta in the VO65 class in Alicante waters: “Coming behind Iker and Xabi is a huge challenge. We hope to enjoy it a lot with Willy Altadill and Ñeti, it is a pleasure to share a project with them even though we joined at the last minute”. Precisely For Altadill it will be his third edition of the regatta: “I was lucky to be in the two previous editions with MAPFRE and now I just think that I would have loved to have been born ten years earlier to have shared more projects with these colleagues.”

Will not miss the appointment Jaime Arbones, who is curious to have competed in The Ocean Race under all its names: in the Whitbread 1993-94 with Galicia Pescanova, in the Volvo Ocean Race 2008-09 with Telefónica Negro and in this edition with Long live Mexico. “I am privileged to have been in the different editions and to be able to do it now with Willy and Carlos, sons of my colleagues in previous projects, it is a luxury. I am delighted”. On the boat, Arbones will be with ‘Chuny’ Bermúdez de Castro and her son, Carlos. The latter did not miss the opportunity to verify the enthusiasm that makes him compete with his father and Jaime Arbones: “I am very excited, I come to learn from Jaime and my father, from a very young age I have followed his career and now being here is a dream”. Finally, Sinbad Quiroga (Team JAJO), also champions the legacy of his father, Quino, another veteran of the regatta and added that “my father used to tell me stories about traveling around the world since I was very little; he is my reference and for me being here is a dream”.