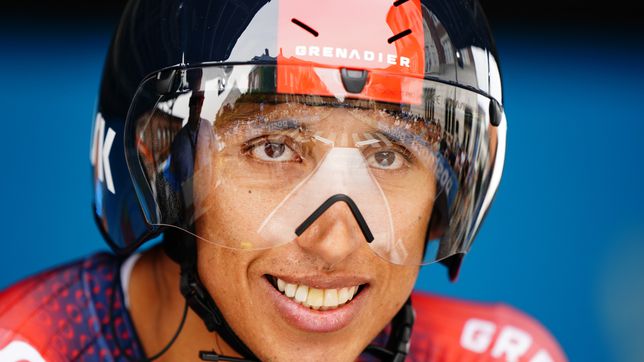 One year. It could be little. It goes by fast. But there are years of years. In which there is no certainty of what is going to happen, of what is coming, even the next day. This was the case of Egan Bernal who on January 24, 2022 lived the most important moment of those 356 days. The accident that almost took his life and from which he has already recovered.

In that year, Egan had to be reborn. But the mentality of a Tour de France and Giro d’Italia champion is not easy to beat. Just as he put passion into his career, he also put passion into his recovery. “If a year ago when I just had the fall and I just woke up, they had told me that in a year I would be thinking of competing in a Tour de France, I don’t think I would have believed it”he said a few days after traveling to San Juan, his first competition of 2023.

It was not easy. But it is that nothing has been easy in Egan’s life. Because, he himself describes his accident as the best thing that happened to him in the year. The learning and experiences that he had he would not have had if that bus did not cross his path. “There have been months of a lot of silent work, which cannot be seen, getting up and starting from scratch. Even learning to brush your mouth, to eat…”

He always had the support of his family, his friends and the people who, in his same condition, encouraged him not to give up cycling. Because if. She thought so. Those same people and their tenacity have him ready to start a new season in which, as he says, he is not going to participate alone. He is going to compete. And his biggest challenge is the Tour de France, although he also thinks about the Tour of Spain.

Egan also talked about his rivals on the World Tour, the Tour Colombia, Nairo and Superman López, their preseason, their numbers and de his calendar for 2023 that will begin in Argentina and continue in the National Road Championships in Bucaramanga.

“The Egan that I always was”

How are you physically and mentally?

“The truth is very good. Everything has gone very well, we have trained a lot and now we are traveling to Argentina to do our first competition. Very motivated to see how we really are”.

How is the strength of the right leg?

“Very well, it is improving little by little. The truth is that I think I have made some very good numbers training. Cycling is a sport that can only be measured by numbers and that is how you really know how you are. They have been very positive, but training is one thing and the race is another. The idea is to compete and really see how we are. I am motivated and I want to do races now to see how I am”.

Do you feel surprised at what you did and surpassed this year?

“Actually, yes. Surprised and very happy. Also for everything that has happened. Not even a year has passed and I’m already thinking about getting to the Tour de France and not just finishing or participating, but trying to go for the general classification and do my best. If a year ago when the fall was just over and I just woke up, they had told me that in a year I would be thinking of competing in a Tour de France, I don’t think I would have believed it. Thanks to the support of my family and the team, everything has been possible”.

Do you think the accident experience made you unique?

“No not at all. In fact, I think that one of the things I learned from the fall is that we are all the same. Anything can happen to anyone and I really think what I want to show is that if you set your mind to things, you should fight for it and get ahead against all odds. It has been a very complicated process, it has been months of a lot of silent work, which cannot be seen, getting up and starting from scratch. Even learning to brush your mouth, to eat, those small steps that I had to take and that were very painful at first, but that were done with passion and motivation and could be achieved.

I’m not the only one who has an accident like this and who can get ahead, I think many people can. There are daily accidents in our country and mine was in the media, but there are many people like me. That’s why I kept riding the bike because I thought about retirement but what motivated me was seeing the people who set their minds to that and manage to get ahead”.

What was the best of that year since the accident?

“It may sound strange, but at this point I think the best thing that could have happened to me was the accident. It was very hard. Obviously, if I could turn back time, it would not have happened, but once it happened and I was a year later, I think it was one of the best things. I managed to get closer to my family, to God, I met very good people, and what I won with the accident I could not have won in any other way. When I have my children and grandchildren, I will tell them that their father almost killed himself at the age of 25 because he crashed into a bus and that they understand that things, even if they are bad, can turn out well ”.

“Already defined. I’m going to San Juan, in Colombia I’m going to do Nationals, they overlapped a bit, but I put pressure on the team because I want to race in Colombia and it’s the only race I’ll do this year in the country to be close to my family and people. Then I go to Andalusia, then Paris – Nice, the Basque Country, which are tough but are very good at the international level and it would be good to do well. And then, the Tour de France, which is the number one goal of the year and it depends on how the Tour of Spain comes out of the Tour”.

Sometimes it is not understood, but the races he did last year were fundamental…

“Yes. My idea was to start the year without having in mind that my first step was to try to finish a degree. It was the first goal that the team had given me this year and we already skipped that. It’s going to be difficult, but I look forward to getting over that chapter of my life and going back to being the cyclist I was before. So clearly the races we did last year were important. Many people said, ‘he didn’t finish, he didn’t show his best level’, but I did it all by technical decision and I feel ready to be the Egan that I was before.”.

Many runners like Pogacar or Vingegaard always remembered him. What did it feel like to always be in force?

“I think it is the respect that one can have towards the other riders. In truth, when I crashed I received thousands of messages and during the season many of the riders you named kept writing to me and they showed that respect. If that happened to a runner like the ones you named, one would be super aware because it is something very hard. What I rescue is that. The respect that other cyclists showed. Some think that there is a lot of rivalry, but on the contrary, we live in Europe and when we see each other we sit down to have a beer together.

By the way, which racer do you like best, Remco, Pogacar or Vingegaard?

“They are all very good runners, each one has their own different style and buying them would not be worth it. Pogacar has won two Tours, Remco won the Tour of Spain, Vingegaard won the last Tour for Pogacar. They are impressively good. They are to be admired for what they do because the numbers they do are from another planet. When a generation like the one that exists now appears, you just have to keep your feet on the ground, do your best and have respect and admiration for the other runners for being the best in the world in a sport that is the toughest in the world and because We are at the top of the level”.

And what do you think of Leo Hayter, Connor Swift and Thymen Arensman, new signings from Ineos?

“I think the team is surrounding itself with very good young riders and we have to start cultivating these youngsters to be number one in the world again. They are good hires thinking about the future. From three to four years they will do very well and they are to be taken into account”.

What do you think that the Tour Colombia has not been done?

“It’s a pity, I really don’t know what problems they have had and why they haven’t, but it’s a pity that I’m not here. It was a race that people liked and the teams came because there were a lot of Colombians and we pressured them to be there. We did training camps here, we shared with people and it was a success. We all said it was a Tour de France. In Zipaquirá and Boyacá there were kilometers of people. Hopefully more can be recovered by the fans than by the cyclists because Colombia is a country of cycling and in most houses there is a bicycle and the passion to come and see the cyclists in the Tour Colombia was the norm”.

What do you think of the absence of Nairo and Superman in the World Tour?

“It’s a pity too. They are very good. Imagine the story of Nairo and how people love him for being that cyclist who once again gave Colombia hope and is a rider that everyone takes into account. In Giro y Vuelta he won and it’s a shame not to have him. At least López got a good team, Team Medellín was his best option, he will be well surrounded, the manager is very good, they do very good races, it can be said that it is the best team in Colombia and it is the best option. They’re going to San Juan, he’s already won in Villeta and I really think it was a good deal for both parties. I don’t think it’s easy to find a team at this time of the year and Team Medellín was a good option”.