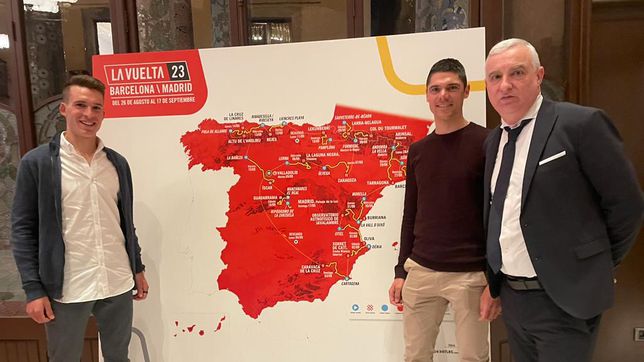 Eduard Prades (Alcanar, Tarragona, 35 years old) has extensive experience in professional cycling after passing through Andorra-Grandvalira, Azysa, Caja Rural, OFM-Quinta da Lixa de Portugal, Movistar Team and, again, Caja Rural -RGA insurance. He was representing the Navarrese squad in the presentation of La Vuelta last Tuesday, proof that he wants to run again in 2023. He already did it in 2016 (position 127) and 2018 (68). Last year he competed in the Road World Championship and ranked 87th in Wollongong (Australia)

– Excited about the new campaign?

– Yes, we all really want to start and show that a great team has been made to fight for all our goals. We will try to win races as soon as possible. Every year we say the same thing but it is true that we are looking forward to the start of this year.

– You have to add points and merits soon to convince the organization of La Vuelta and that they have no doubts.

– True, this year there are two invitations and there are four teams willing to run it: Euskaltel, KernPharma, Burgos BH and us. That is why I also say that the season is exciting from the beginning and we are going to fight to be there from day one.

– It is also an edition that covers Navarra in two stages and those things tend to have their influence.

– The layout is very beautiful and demanding. In our case, with the Larrau stage that reaches Belagua and the Lekumberri stage. Hopefully that will help us too. But we have to make the merits ourselves. It’s going to be a great Tour and I’m sure the fans will enjoy it. Surely more than us, we have to pedal and there will be days with great hardness. It is that there are going to be fifteen stages with mountains, now we were commenting on it.

– Were you in Barcelona on Tuesday for the presentation of the Spanish round?

– Yes, that’s where we came from and linked up with the debut of the professional team and the subsidiary of Caja Rural-Seguros RGA here in Pamplona. It is what usually plays on these dates.

– Being Catalan, it is very important for you that the round leaves Barcelona, ​​right?

– It’s true, we will do everything in our power to be able to run it again. We are very excited and what we have to do is start competing and get good results.

– Did it hurt not to run it last season?

– Yes, it was quite hard because it is one of the main objectives with which we always start. For us it is a prize and watching it on TV is hard. The Caja Rural season is, to a large extent, linked to running the Vuelta because of the sporting theme but also because of the sponsors and people who follow us. Not doing it in 2022 was a blow.

– The first thing is to make a clean slate with last year since I had health problems and suffered, for example, pneumonia. If you’re sick, it’s normal for you to have a hard time picking up the pace.

– But the team had a good campaign.

– Nine victories. It’s not bad at all. The same is not in major races but they are still victories that show that work is done well here. If things are not done well, races are not won. We will have to try to add points as soon as possible. We want to make sure we are in the best races and, of course, be in Barcelona at the start of La Vuelta.

– They have some casualties compared to last season, right?

– Yes, Mikel Nieve has decided to hang up his bike and all that remains is to thank him for all these years that he has given us. Aritz Bagüés continues with us as Director of the subsidiary and then Jonathan Lastra has gone to Cofidis. It’s a shame because you have a relationship with him but you also have to be happy because it’s important to keep climbing the steps and, step by step, to be able to ride in the UCI World Tour.

– Kids like López Cuesta, who won the Spanish Under-23 championship en route in Palma de Mallorca, have also made the leap.

-There is a good quarry and it shows. In this sports group the base is worked a lot and it is seen year after year. Let’s see if they start to show their category because the second team also added several wins in their category.

– Great atmosphere at the presentation of the Baluarte in Pamplona. With characters like Indurain, Nieve, Unzué or the national coach, Pascual Momparler.

– Yes, it’s true, many people who support us. Like sponsors or institutions. We must thank everyone who came to the presentation. We are 21 professional cyclists and then the boys from the subsidiary team.

– Do you already know the beginning of your calendar?

– Yes, I will start in Valencia and Marseille. We will try to fight from the beginning. We started with great enthusiasm and with the intention of being seen. I don’t know my calendar now by heart but, for now, we are going to go step by step. If we are here it is because we want to run and enjoy.