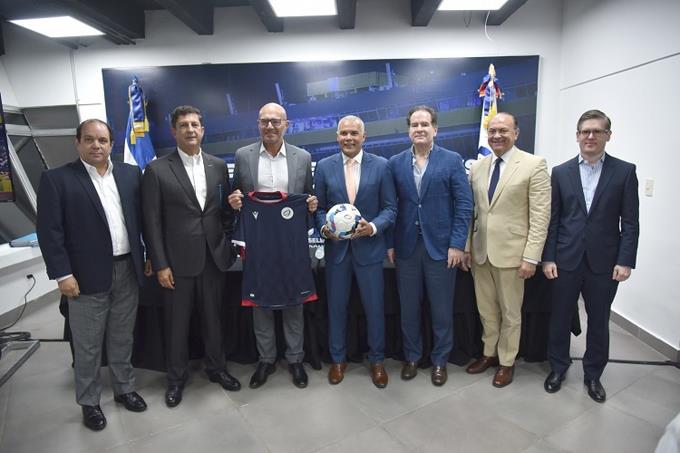 Without much noise but with great determination, the Dominican Football Federation presented the National Teams Commission that will execute the National Teams Project and at the same time the new leader of the absolute team, the Argentine Marcelo Neveleff.

The event held at the headquarters of the Dominican Football League in the Olympic Stadium was headed by Rubén García, president of the Dominican Football Federation, who summed up his words in the phrase of Cervantes who says: “Trust in time, which usually give sweet solutions to many bitter difficulties”, affirming with her that the work that she will carry out will bring positive and unprecedented results in Creole soccer.

The commission will be made up of Rubén García himself, together with Manuel Estrella (president of the LDF); and businessmen Manuel Corripio, Ramón Hipólito Mejía and Vincent Le Borloch.

The primary objective of this group will be to attract and generate resources to improve the living conditions of all the players that converge in soccer and to organize the work of the sports discipline throughout the country.

Manuel Estrella, who was the main promoter of creating this commission, said that Dominican soccer is on the right track, but that it needed more support and that is why so many committed themselves to the cause.

On behalf of the Dominican government, Franklin De la Mota, Vice Minister of Miderec, participated in the activity.

New Technical Director
The Argentine Gabriel Marcelo Neveleff, was presented as the new technical director of the Absolute Selection, who will take the reins of the national team that in March will participate in the first phase of the Concacaf Nations League 2022-2023 against French Guiana and Belize.

Nevelez thanked God for the opportunity that he had been looking for a long time and said that the minor categories have shown that in the country there are conditions to dream of big things in the coming years.

“Many years ago I came to the country and I realized how valuable soccer is, the mission is to position ourselves well in the Caribbean and in the world, I came to develop players, but above all to compete.

Training CategoriesMarcelo Neveleff, will also be the coordinator of the training categories at the national level.

Plan 2023-2030
Daniel Pabón, Development Director of Fedofútbol presented the pillars of the team project that will last until 2030.