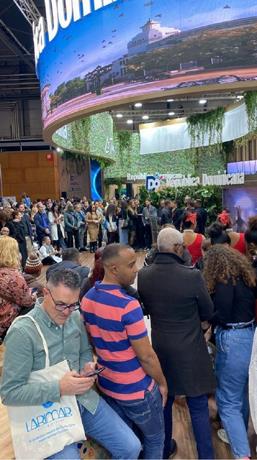 The Dominican Republic achieved its greatest successes this year in the history of its participation in the Fitur tourism fair, where it had one of the most visited stands and agreements for billions of dollars were reached. Since the fair began on Wednesday the 18th, the Dominican stand attracted people’s attention, since it guaranteed them to live a three-dimensional immersive experience in the great and diverse tourist attractions of the Dominican Republic, more than 8 thousand kilometers from that reality. The ingenuity and talent of Iván Tovar was impregnated at the Dominican stand with his "Living Surrealism”. Tovar, a native of San Francisco de Macorís, is currently the most valued Dominican artist, after the sale of his work “La Menace/ La Amenaza”, at Sotheby’s auction house, for two hundred and fifty thousand dollars (US$250,000) in May of 2020. His work is characterized by volumetric and spatial shapes on a dark background, framed within Surrealism, a style that he assumed while living in Paris, exhibiting alongside the great representatives of Surrealism internationally. The Minister of Tourism, David Collado, expressed his satisfaction with the achievements made at FITUR, after assuring that he is "without a doubt the most successful participation of the Dominican Republic in this important tourism fair in Spain and the world". "The achievements in FITUR are tangible facts: greater connectivity and agreements that represent investments for millions of millions of dollars"said Collado. He recalled that agreements were reached at FITUR for more than 3,445 million dollars for tourism development, of which 1,645 million will be invested this year. He said that thanks to these investments, more than 3,000 new rooms will be built, which will generate 10,000 jobs directly and indirectly. He also highlighted the agreements signed with airlines and the main tour operators in Europe.