The cryptocurrency market continues to lose control. Overall, it fell 6.57%. Ethereum price is weakening below the resistance at $ 4,300 and getting closer to $ 3,900. However, a chart pattern seen in weekly data suggests that the price of Ether will not lose the uptrend of the 4th quarter.

In the wake of Bitcoin’s decline, ETH’s price has lost nearly 16% of its value over the past 10 days. However, the second largest cryptocurrency on the market has struggled to recover. On several occasions, she climbed above her May ATH of $ 4,365. It suffered much less than the other top 10 cryptos. It is not trivial that the BTC-ETH market dominance gap narrowed during this bear market sub-period.

The fall to $ 3,900 worried investors a bit. But, the fact that Ether is near to return to the old resistance or new support of its ” Cup and Handle “ pattern in weekly brings hope that the increase will continue. 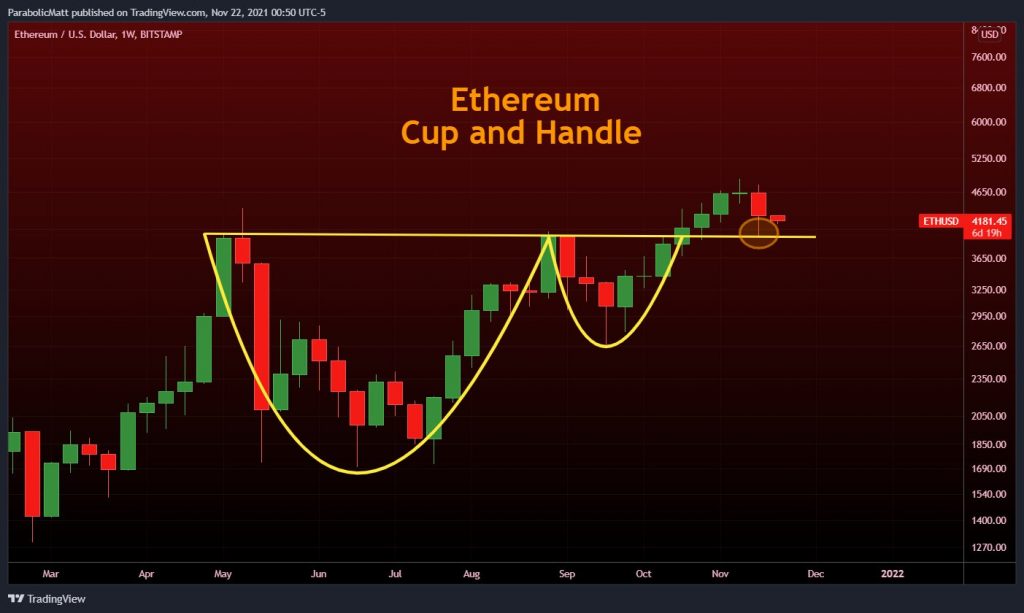 Before tackling the posture of the ETH price curve, it is important to see what theoretically the chartist figure of cup and handle or cup with handle in French. It is in fact a bullish continuation pattern that marks a period of consolidation followed by a breakout. According to a Harvard study, it has a 65% success rate in forex and 68% in the stock market.

According to the financial encyclopedia, Investopedia, the mug with handle is:

A technical indicator where the movement in the price of a security looks like a “cup” followed by a downtrend. This drop, or “handle”, is meant to signal a buying opportunity to take a long position in a security. When this part of the course formation is complete, the stock may reverse its trend and reach new heights.

In the definition of Investopedia, we can see that from the chart shared by Matthew Hyland relayed by Cointelegraph, Ethereum had already tested the chartist figure but it had not reached the target set by the breakout despite its higher at $ 4,900. On the contrary, its price has even corrected in recent days. In fact, this correction which would bring the price of ETH towards the resistance level of the “cup and handle” is in a way a confirmation that the second cryptocurrency has not detached itself from this bullish pattern.

According to what Investopedia tells us, the entry point occurs when the stock crosses or moves upward through the old resistance point (right side of the cove). This breakout must be continued by increasing the volume. Compared to the price curve of ETH, it has touched the old resistance but it would have to rise again with pressure on demand even if it means causing an increased volume in the intraday session.

At this technical breakthrough, the perfect target would be $ 6,500. Why? The amount of profit in the cup and handle is equal to the difference of the resistance of and the lowest level of the cup. The target level is for its part fixed with the level of the entry point added to the profit amount. So, for the Ether price, the Target is indeed at $ 6,500 because it corresponds to the amount of profit ($ 2,500) added to the entry point which is in the $ 4000 zone.

Grayscale report: Metaverse could be worth more than $1 trillion in coming years