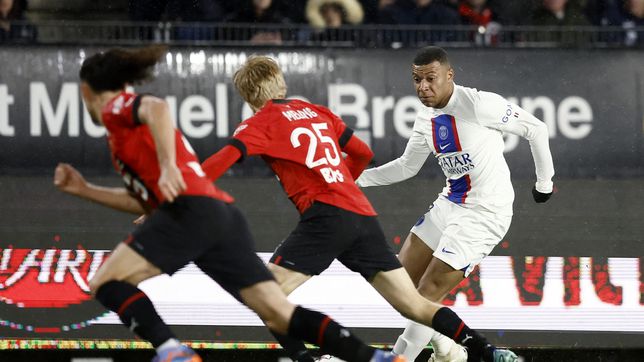 PSG is one month away from a capital tie in the Champions League against Bayern and the sensations cannot be worse right now. The Parisians began the year by losing at Lens and were defeated again on their visit to Rennes. The Bretons, thanks to a solitary goal from Traoré, exacerbated the bad form of Galtier’s men, who found themselves in an unsolvable labyrinth at Roazhon Park.

PSG, without Mbappé or Achraf as starters, is having a hard time finding their best version after the World Cup. Even before Qatar he showed signs of weakness, but there are few strongholds of that overwhelming, irrepressible and hungry team from the beginning of the season. In cold Brittany, the leader of Ligue 1 ran into a rival, Rennes, who withdrew him with a system of five defenders that was a total spider web for Galtier’s men.

In fact, he went to rest without hitting the goal. Except for a shot from Messi on the edge that went over the crossbar and a shot from Vitinha from long distance that went a long way from the crossbar, PSG was a ghost in Rennes. Those of Genésio were little by little believing that they could hurt their rival and forced Donnarumma to intervene. The Italian saved a great shot from Gouiri on the front line and then took Kalimuendo’s 1-0 lead with a shot from point-blank range that was practically a goal.

Galtier waited nine minutes to bring on Mbappé. PSG was cornered in Rennes, unable to create danger and with a Donnarumma that was becoming gigantic. However, the night was red and black. A great Breton counterattack, started by Truffert, who grabbed the back of the recently entered Achraf, and finished off by Traoré with his left, was the straw that broke the camel’s back for the French capital. Mbappé, on a pass from Messi, missed a flagrant opportunity against Mandanda and PSG consummated their second defeat of the season, the second in the last three games.