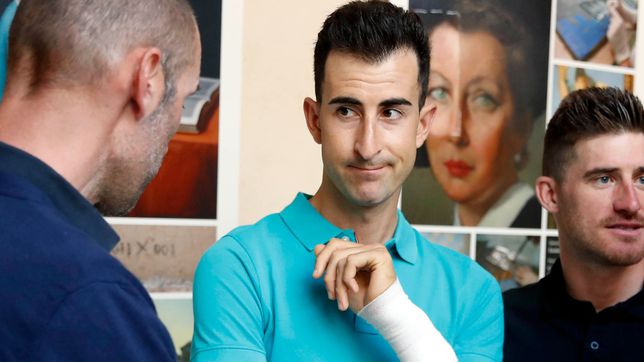 2022 will be the year that Diego Rubio (Navaluenga, Ávila, 31 years old) will always want to forget. He was only able to cross the finish line three times this season: on January 23 at the Valencia Grand Prix (22nd), on the 26th at the Calvía ​​Trophy of the Mallorca Challenge (94th) and on the 27th, at the Alcudia Trophy, His first serious injury of the season came: a broken femur head. Operating room, hospital stay and long recovery. Four hard months until the sun came out clearly again. The end of May arrived and the man from Avila, recovered, was putting on a number again in the Estonian Tour. He completed the initial prologue: “We’re back”, the Burgos BH runner celebrated with joy, a few hours after suffering a fall that will mark his career.

On May 27, he crashed in the first stage of the aforementioned Estonian race: open fracture of the ulna and radius and emergency operation. She had to start over, but from the first moment things did not go well. “The operation in Estonia was a botch job. The bone did not weld, the plates were where they should not have been, bad cast, a deviation of the wrist of 40º…”, he laments to AS Rubio from Ávila while he combines the afternoon taking an online course. They were months of uncertainty, doubts about his physical condition until the beginning of October arrived. He had to go through the operating room again, now in Spain. Again in the battered armbut those months that passed after the failed initial operation were key to a future that now does not look good: “I still have a cast. Doctors are not optimistic with the full recovery of mobility in the arm. Perhaps to lead a more or less normal life, it may be, but to return to competition they don’t trust too much.

With these problems, Burgos BH announced its renewals for 2023, and Diego Rubio’s was not among them. “I understand the team in its decision. Of course, I will fight as much as I can. There are no deadlines of any kind yet, and in early December I have a new review. Psychologically it is not an easy situation. There are times when you don’t get to assimilate it, and obviously the doctors don’t tell you directly that you’re not going to compete anymore, but they give you their opinion on the situation”. With all this, the possibility of him withdrawing is obviously among the options, but he also warns: “I don’t want this to be my end as a professional, I’m going to try and do everything possible, but I also have to be realistic”. For now, he will start 2023 without a team, without knowing what conditions he will really be in and next year he will be the one who decides if he rushes his option to continue competing or has to leave it.

“I recently spoke with Julio Andrés Izquierdo (director of Burgos BH). We have not completely closed the door for the future,” says Rubio with an optimistic mood.. “Honestly, at this point I don’t even ask about deadlines when I go for revisions. First of all, on a daily basis, I would like my arm to be fit so that I can lead a normal life. That is the main thing, and obviously later I would try to fight to continue with my dream ”, adds the burly runner of 1.93 meters, who ran La Vuelta four times (he finished three) and in 2021 he had to leave in the final days due to an infection. With a past in the Caja Rural and in the Portuguese Efapel, in 2017 he landed in a Burgos in which he was a reference until this year. His fortune has not been with him in recent times due to injuries, and medical professionals warn that his continuity as a cyclist is complicated. In memory, he went head to head with the German Schachmann in the sixth stage of the Volta a Catalunya 2018, in which he finished second. Time, and the state of his arm, will tell if he puts on a bib again.