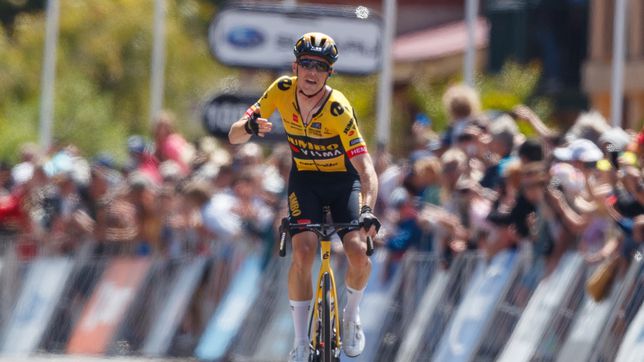 The second stage of the Tour Down Under has allowed us to see the best version of Rohan Dennis in action again. The Australian cyclist of the Jumbo-Visma showed off his power to get the victory in a day in which, along with him, other favorites also moved to fight for the general classification, such as Jai Hindley, Simon Yates or Jay Vine. The stage had a double prize for Dennis, since he becomes the new leader of the general classification.

The riders faced a 150-kilometre course between Brighton and Victor Harbor, in a stage with the ever-present risk of fans due to strong winds. There was no break in the first 30 kilometers and Michael Matthews took advantage of that to scratch Bettiol for another second overall in the first intermediate sprint. After the sprint, Manuele Boaro and Johan Jacobs jumped from the peloton in search of the escape and this duo came to have up to 4 minutes of difference over the peloton.

A squad in which UAE and Jayco began to push hard to break the group with the dreaded fans due to the wind in the intermediate section of the stage, leaving 37 riders in the leading group with almost a minute difference over a second group in which they stayed stragglers Caleb Ewan, Ethan Hayter and Geraint Thomas, although with 86 kilometers to go the peloton regrouped again and the escape of Boaro and Jacobs came to an end.

However, on the climb up Nettle Hill the race broke up. Alessandro Covi was the first to attack and his wheel started Simon Yates, Rohan Dennis, Jai Hindley, Mauro Schmid and Jay Vine, while Michael Matthews tried to recover positions after having problems with the chain of his bike. The breakaway fell to five members after Covi gave in and managed to maintain a 30-second lead with a peloton where Bettiol gave in due to cramps and said goodbye to the lead. Despite the work of Ineos, Bahrain-Victorious and Trek-Segafredo, the escape of Dennis, Vine, Schmid, Hindley and Yates played out the stage and Dennis finally took the victory after launching a hard attack in the last kilometer that nobody was able to answer and that allowed the Australian to triumph on his land and also put yourself as the leader of the general. This Friday, a cheat day of 117 kilometers between Norwood and Campbelltown on a route in which the climb to Corkscrew, of 2.4 kilometers at 9% and located 6 kilometers from the finish line, could break the race and bring movements among the favourites.

Classification of the second stage of the Tour Down Under

General classification after the second stage of the Tour Down Under