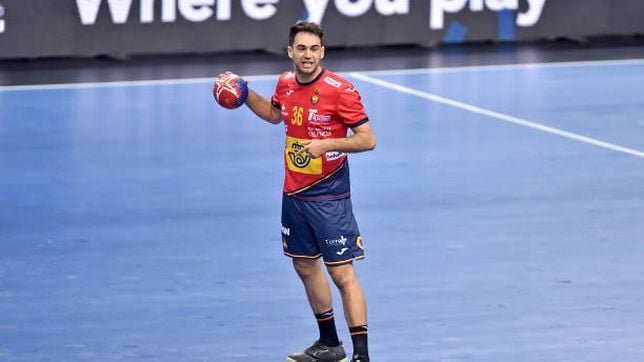 The French PAUC central defender, Ian Tarrafeta, one of the eight rookies for Spain in this World Cup in Poland and Sweden, will return to Spain this Monday and will miss the remainder of the World Championship due to a cracked rib he suffered in the match against Montenegro that will prevent him from continuing to participate in the competition with the Spanish team.

That Tarrafeta did not play against Chile seemed like a tactical decision, but this morning it was confirmed that he will not play again in the World Cup because the fissure requires at least a month for physical recovery of a center-back who happens to be the future of Hispanics in the short term, 24 years old (turned this month) and trained in Granollers.

Ian’s injury once again changes the balance of Hispanicswith two players per position except on the right side, with three, Álex Djushebaev, Maqueda and Garciandia. With Cañellas’ injury, Álex Djushebaev moved to the central position, and Casado to the left. Without Tarrafeta, At the moment it seems that Álex and Casaso will be the centre-backs, although Cañellas could also get into that position.

Therefore, today Jordi Ribera will assess who calls to complete the group, although conditioned to passing the famous mandatory PCR for all players, and that would possibly have to be done on Monday: antonio garcia (which was in the first part of the preparation), Pol Valera (central for Granollers who is trying to sign Barça) and Gurbindo (who would enter the right and leave Álex as central) They are the clearest options, although the coach could surprise with Gurri (Granollers). That is the Ribera pool, but it has cleared up early in the afternoon: Pol Valera is the chosen one.

Valera is from the same twinning as Tarrafeta, and together they entered the Granollers first team. However, Pol has continued at the Vallesan club, and now he has stood out (with Jon Azkue) as Asobal’s best centre-back, so much so that Barça intends to hire him for this season finale.