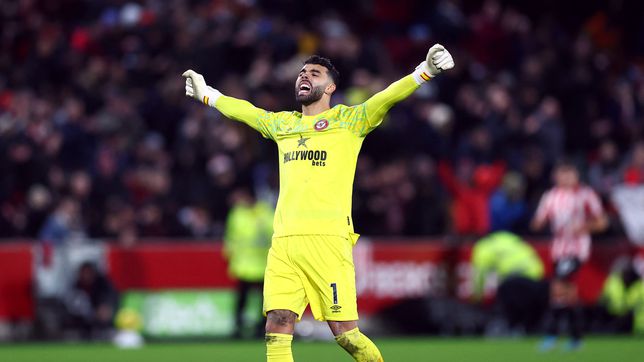 David Raya (Barcelona, ​​1995) has dazzled in the Premier for his prodigious saves but, above all, for his magnificent footwork. He shines so much in that facet that Jürgen Klopp, after a Brentford game with Liverpool, said that he could perfectly wear the number 10 on the shirt. He came to England from Cornellá at the age of 16 without knowing English and now he has several pretenders to the throne knocking on his door. His contract ends in 2024 but it is very likely that next summer he will change his destination to face more ambitious goals.

You’ve been in England for eleven years, are there more chances of being recognized on the street in London than in Barcelona?

Yes. Just eleven years ago I arrived. I remember that it was January 9 and it’s a long time, so it’s normal that he’s better known here than in Spain.

Even after having gone with Spain to the World Cup in Qatar?

As a result of going with the national team, people in my country know me a little more, but it is still far from England in that sense.

Did it hurt not to play any minute in Qatar or did you expect it?

It hurts all the players not to play in any game and in one more World Cup. I was hoping to go out for a little while but the opportunity did not arise and that little thorn remains stuck in me.

What images do you remember of the dressing room after the elimination against Morocco?

All quiet and very hurt to fall having been better. It was a very bitter situation because we were very excited to do something great. In addition, the human group was very good and we were very united

Was there anyone trying to cheer up or was everyone down?

The coach was talking to everyone one by one to encourage us. It all happened very quickly and at that moment he didn’t have time to assimilate it. Later, at the university where we were concentrated, we talked a little more about it but not too much and we immediately returned to Spain. It was a very sour day in which everything happened very quickly.

Were you surprised by the dismissal of Luis Enrique?

I think it took us all by surprise, but we already know what football is like and we are used to these circumstances. It was a shame and I wish all the best to him and his staff.

No. Just seeing him in a concentration training the Under-21s and greeting us sometime, but nothing more.

His case is curious because he had never been summoned for lower categories and the first call is to go with the absolute. It is striking…

It is. Coming to England at such a young age and even playing in the 5th division, perhaps I was a bit off the radar, but being in the Premier League perhaps I will attract more attention and I will always thank Luis Enrique for counting on me because I fulfilled a dream.

Let’s go back to the origin. You trained in the lower categories of Cornellá and at the age of 15 you went to try out with Blackburn Rovers, what was the story like?

I went for four days at Easter in 2011. We were about ten players my age and even younger. I must have called them to their attention because they contacted me again and in October, already 16 years old, I spent another two weeks trying it out. A few days later they decided to sign me in the January market to adapt to the club, the language and the city with a view to starting more filming the following season.

At the age of 19, you made your Blackburn first-team debut, played several games well, and then suddenly spent more than a year in the dark, what happened?

I still don’t know very well. I was playing and I didn’t make serious mistakes but after a national team break the coach told me that I didn’t look the same as before and that he was going to send me to the bench. The team was not going well and I suppose that the coach decided to kill the young goalkeeper. A month after that they dismissed him but I spent 18 months without playing.

A year and a half! Did that adversity make you stronger for the future?

I didn’t play any league games in that period and only two in the cup without really knowing why, but that helped me progress. I don’t sink if things go wrong and I try even harder to be better, so I focused on improving myself every day.

Where does that footwork that so impressed Klopp come from?

From a very young age, on Sundays I used to meet my friends to play on a futsal court that was in a park next to my house and I played a lot as a player. I was not bad at it and since then I have felt very comfortable with the ball at my feet.

I don’t know if you can be honest, what team did you belong to when you were little?

In Spain none. It’s the truth. I watched the games without passion. In England I followed Arsenal and Liverpool a lot. Also United.

And was your idol a goalkeeper or a field player?

My idol was and still is Iker Casillas.

Do you notice that you have become something of an idol in Brentford?

I don’t know if that much, but I do consider myself an important part of the team and the club. I fit in very well from the first moment, the fans love me a lot and the love is mutual.

You and Ivan Toney pull the bandwagon but at the media level a partner has arrived who overshadows you, how is Romeo Beckham? Does he look anything like his father in beating?

At the moment I have not trained with him any day. He’s in the second team and I’ve seen him take a free kick once, but I can’t judge him yet.

It is rumored that you have little time left there, are you excited about the possibility of facing bigger challenges?

Every player has goals and wants to improve. Now I am focused on my team and in the summer we will see what happens.

Contract ends in 2024. If Brentford want to get money for you, they will have to let you out in the next transfer window…

If they want to do business they will have to do it but there is a long season left and I am only focused on doing it well. In summer we will assess my situation.

Have you had contacts with Ajax before they signed Rulli?

There has been something, but nothing firm.

His team has had an incredible season. Of Big Six Only Arsenal have beaten them in the Premier…

It is to be very satisfied. We try to study the top teams well and play in such a way that we can get something positive out of it. For example, against Liverpool, who press a lot, we have to play longer. And so with everyone. It is also important to maintain our high level on set pieces.

They beat United 4-0, Liverpool 3-1 and City 1-2 at the Etihad, which victory are you most proud of?

They are all incredible, but against Liverpool we had the perfect match. We applied everything we had tried and the plan worked out very well.

Against City, Haaland did not score. That has merit…

Well yes, because he is a great player and defines like few others, but we knew how to cancel him well and also De Bruyne, who is a key footballer in that team.

Is he the striker who has impressed you the most up close?

No. The one who has impressed me the most has been Cristiano. Not only as a striker, but as a player. Then I would put Kane and De Bruyne, but for the legend that he is it made me happy to be able to share the field with him. After seeing him so many times on television since I was little, I felt very proud to be able to compete against someone like that.

Between City and Arsenal, for which bet for the title?

I see Arsenal very strong this year. I think they’re a favorite and I’m betting on them, but City and those who come behind cannot be ruled out because this is the best league in the world and the competitive level is enormous.

After so much time in England, what would you say if you were asked to become a British citizen?

I would say no because we were already evaluating the possibility of having dual nationality for the matter Brexit and they asked me to give up my Spanish passport, but I will never do that. I am Spanish and I would not accept that proposal if it ever comes.

You have never played in the Spanish league, would you like to or, being in the best league in the world, don’t you think about it?

It is a door that we will see if it opens at the right time and with the right destination. I won’t say no because I would like to, but at the moment I am very well here.

The team will want to return, will you be nervous before Luis De la Fuente’s first call-up?

No. I’m trying to do my job as well as possible to continue going to the calls and the coach will have to decide.

One I did to Diogo Jota, from Liverpool, in our stadium last season.

The most painful failure.

It was a lack of attention in the game for promotion to the Premier against Fulham that prevented us from going up.

There are a few but I prefer one from the Belgian Tielemans, from Leicester, from 30 meters, who entered through the squad.

The most dangerous striker in the Premier.

The best goalkeeper in the world right now.