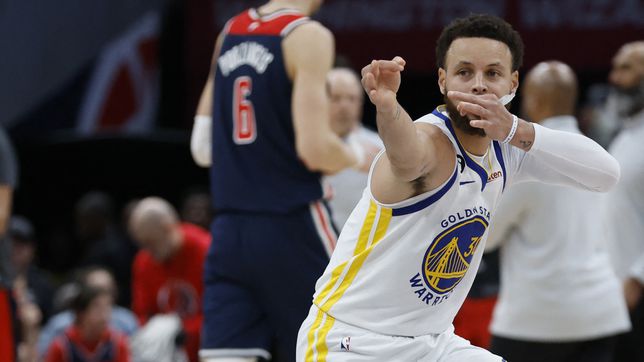 The Warriors took the duel in Washington at the hands of Stephen Curry (and Jordan Poole) against Wizards who fought for the victory until the last minute. The Californians came to this match after losing four of the last five and, despite Curry’s return, there were all doubts about the champion. Klay Thompson wasn’t there today, but Andrew Wiggins was. In the locals the best was Kristaps Porzingis, at the level of his season, since he signed 32 points. He also draws attention to Kyle Kuzma’s double-double (16 with 11 rebounds), but his shot selection (5/20) was horrible.

However, the Wizards, who had been several sections of the game ahead, could not do anything before the scoring gale that appeared in front of them in the last minutes. With 106-105 on the scoreboard, Curry hit a triple at the buzzer and with two defenders on top, a basket from two, an assist and another triple. The result was 111-115 and it was not all over yet. The point guard was going to hit another triple with stepback 2 minutes from the end and Jordan Poole was going to sentence with one more with 1:30 left in the game. The point guard finished with 41 points and a 6/15 on three-pointers. The shooting guard, with 32 goals and 7/13 from the perimeter. Draymond Green also completed a great performance, with a 17+6+10.