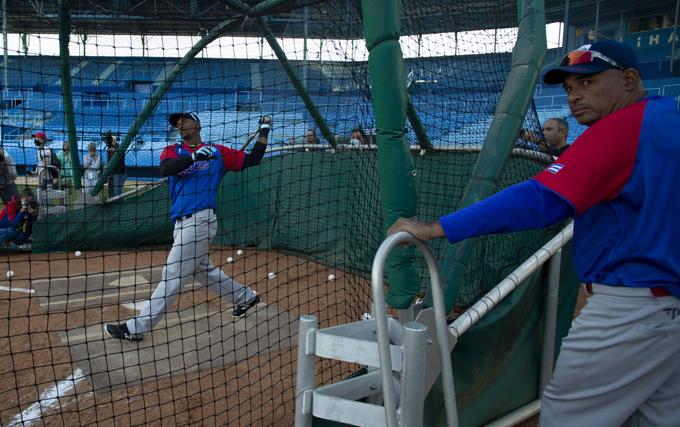 Cuba began its training sessions with a view to the World Baseball Classic and does not hide the expectation of progressively incorporating various figures who are active in clubs in the Major Leagues of the United States.

Third baseman Yoán Moncada and center fielder Luis Robert, both from the Chicago White Sox, stand out among the group of star players on the United States professional circuit who have been called up to the Cuban team for the first time. It is a gesture that shows a change in the philosophy of this sport with which they hope to strengthen their performance in the fifth edition of the tournament to be held in March.

“In previous years we have not had this opportunity now, to share with Major League players,” veteran outfielder Yurisbel Gracial, one of the 50 shortlisted by the Cuban Baseball Federation for the championship, told The Associated Press. “We are going with everything… we want to put the name of Cuba on high.”

“It is a fundamental support that they are with us in this championship,” added Gracial, who plays ball for Japan with the Fukuoka SoftBank Hawks.

There are a little less than two months left for the Cuban debut in a group of the first round that will have Taiwan as host. Their other rivals will be the Netherlands and Panama.

Training sessions behind closed doors began this week at the Latin American stadium in the capital, the main one on the island. Players who have already been released from their clubs both on the island and abroad participate. The rest will be added gradually.

Although in recent days it had been reported that the squad would travel to the Dominican Republic for a training base, the directors announced this Monday that at the beginning of February the athletes will go directly to Japan where friendly games are scheduled and where the other players will also join. summoned, for example those who play in Mexico, in the Major Leagues or as part of the local series in progress on the island itself.

“I think they can teach us a lot, because they have tremendous experience facing the best pitchers in the world… how professional baseball moves in the United States, what is required to go out on the field and improve,” the AP commented. catcher Ariel Martinez.

The Cubans hope to advance the delivery of the final list of the 30 participants to January 24 — February had previously been mentioned — in order to have enough time to carry out the necessary immigration procedures and permits.

“The technical group led by Armando Johnson will evaluate the 50 athletes summoned, either during the work sessions in the Havana stadium, appreciating the final of the Elite League (the Cuban national championship) and through the monitoring that it carries out on the figures that are inevitably prepared abroad,” the Cuban Baseball Federation reported Monday in a statement.

Seven Cuban baseball players with recent performance in the Major Leagues were called up for the first time to join the team. The United States government will give them a special license to compete.

The special permits were necessary since the United States maintains a policy of sanctions against the island in all areas.

Another called up was outfielder Yoenis Céspedes, twice called up for the Major League Baseball All-Star Game. He hasn’t played with the majors since 2018 after parting ways with the Mets.

They will join others who play in leagues in Mexico, Japan or the Dominican Republic and a few more players from local teams. The managers emphasized that they would not summon players abroad who had deserted in the middle of competitions during these years.

At the same time, Cuba maintained a policy against professionalism in sports for years and until the last decade did not allow its athletes to perform in other latitudes, severely punishing those who left the island.

A growing number of figures leaving the country or outright abandoning them during their competitions, attracted by juicy contracts abroad, especially from MLB; negatively impacted the performance of Cuba, a baseball powerhouse. In 2017, Cuba participated only with players from the local milieu in the Clásico and lost all three games of the second round before being eliminated.