While the links seem increasingly close between sport and cryptocurrency, Lazio of Rome, Serie A club has also just succumbed to the fashion of token fans.

While many clubs have used the services of the Socios.com platform, carried by the Chiliz token, the Lazio club of Rome preferred to go through the Binance platform. Zoom today on the outlines of this partnership between the Italian club and the world leader in the online crypto exchange.

For club and supporters alike, the fan token is often presented as a win-win relationship. In this way, the clubs intend above all to strengthen the commitment of their supporters. In particular, by allowing them to express themselves via the fan token. Choice of input music for players, the color of the captain’s armband, token fans then allow them to interact with their favorite club. But not only because they allow you to benefit from new experiences: meeting with a player or the possibility of acquiring NFTs.

For the club, this new financial windfall also allows diversify your turnover. And to fundamentally modify a business model. A business model sometimes undermined by the health crisis and the inability to complete the stadiums.

As Claudio Lotito, the president of Lazio of Rome, says:

“The deal with Binance will allow us to expand our digital presence and connect with our fans and followers like never before. Engaging our fan base with emerging technologies and leveraging Binance’s reach opens up new avenues for future strengthening and support of our club brand. With the help of Binance, we aim to bring the club closer to Lazio fans around the world. The Lazio Fan Token really brings our players and their success closer to fans around the world. “ 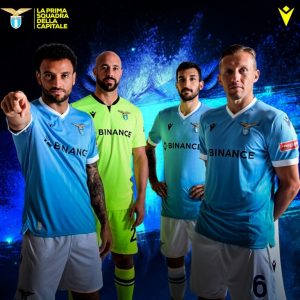 As references to cryptocurrency lurked discreetly on jerseys, the change seems to be underway. For the Binance platform, this is an impressive catch. In Italy, Lazio de Rome is one of the most popular clubs with over 1.5 million supporters. The club even has a base of 2.5 million followers on social networks.

All the outlines of the partnership have not been communicated. Anyway, with the launch of this first fan token, the Binance platform wishes to catch up on the delay accumulated on other platforms. With the Chiliz project in sight.

Where can I get the Lazio Fan Token?

If you are a fan of the Italian club or want to speculate on the token, you will have to go through the Binance platform. The token is accessible since yesterday via Binance Lauchpad. It is marketed under the name Lazio Fan Token (LAZIO). It should be accessible in the days or weeks to come via other means: Spot, bank card or Binance P2P.