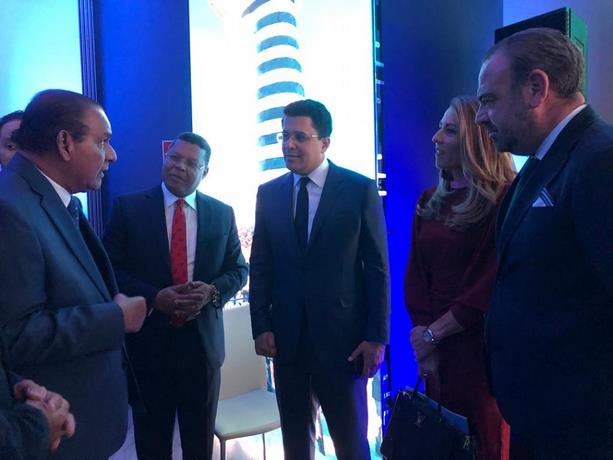 The Minister of Tourism, david colladosaid yesterday that he was coming to Madrid to reconquer the European market and during a “roadshow” with more than 200 tour operators, travel agencies and investors where he presented the figures reached in the arrival of foreigners and the natural wealth of the country, mainly from the destinations of Samaná, Punta Cana, Santo Domingo and La Romana. -Bayahibe.

He indicated that while the world registered negative growth figures in the last two years, the Dominican Republic took a responsible risk and recovered the arrival of tourists, closing 2022 with more than eight million foreign visitors (more than 7 million by air and more than one million on cruises).

During his presentation, Collado highlighted the recognitions granted to the country by the World Tourism Organization (UNWTO); and the general secretary of the WTTC (World Travel and Tourism Council), Gloria Guevara; as well as ForwardKeys, published by CNBC and which placed the country in 2022 as the first of the 10 most visited countries in the world after the pandemic.

The minister offered record statistics of tourism and recounted the country’s success story, especially the public-private alliance as an example in the world, to “embrace tourism”.

He showed the beauties of Cabrera and Las Terrenas; Santo Domingo, with its cathedrals, beaches and other beauties; Puerto Plata, with its cruise ships, Bávaro, Punta Cana and Cap Cana; and, La Romana, Bayahibe. He recounted the impact of free Covid health insurance and how this made the world look to the country.

In his presentation, Collado not only presented the figures, but also the natural wealth of the country and various testimonies, recognitions, roads, public parking lots, but among those that drew the most attention was the new live chat with people located in the same destination of the Punta Cana airport, the Westin of Punta Cana; Bahía Príncipe in Samaná; Playa Macao, Meliá Hotels, Guayacanes, Juan Dolio, who explained the tropical climate conditions, the sun and the beauties of the beaches, who invited to visit the country, the arrival of flights and the warmth of the Dominicans, its gastronomy and even the famous drink “mamajuana”.

He maintained that a great job is being done on public beaches, on the roads and with the tourist police to continue guaranteeing the country as a safe place.

“Today I come to win them back. This is like a marriage, like a courtship. What is not given heat, what is not visited is forgotten”, said Colado when presenting the country with pride.

prospects for success
The minister said that the Fitur 2023 perspectives is very favorable and that he had just finished a meeting with more than 200 travel agencies and tour operators in Spain and the largest in France, Germany, England and Italy.

“It is a good start, it is a novelty that for the second consecutive year we are getting closer to who tourists bring to our country,” said Collado, noting that this event is part of 26 “Roadshow” that have been carried out throughout the world to which the country has been presented.

Collado indicated that the Fitur 2023 expectations are very high and there are more than 50 scheduled meetings and signing agreements with hotel chains that will enter the Dominican Republic for the first time.

This morning at the fair he will sign a agreement with Frank Elías Rainieri who will announce a hotel with more than 1,000 rooms and others with eThe Pioneer group that will announce a 1,000-room hotelwhich makes him foresee this will be one of the best Fitur in which the country has participated.

“There is great expectation, the country has embraced this fair. The Dominican Republic continues to shine and the numbers are there,” said the minister, specifying that far from resting on their laurels, they continue to work every day because it is known that the European market is a challenge due to long journeys and fuel costs.

He revealed that yesterday he would meet with Condor, from Germany, the main line that takes tourists from Germany to the Dominican Republic.

“This is how we have with Iberia, we have with Air France and we are very excited about this day of Fitur and how we have started,” he said, speaking to journalists at the end of his presentation.

success story
Minister Collado said that the country has a long history of successes, but the main one is the public-private alliance to embrace tourism. He recalled that the UNWTO (World Tourism Organization) stated on three occasions that the Dominican Republic is an example to follow

Support for the economy
Tourism activity represents 15% of its gross domestic product (GDP) for the Dominican economy, more than US$8.5 billion in income in dollars and more than 899,000 direct and indirect jobs.