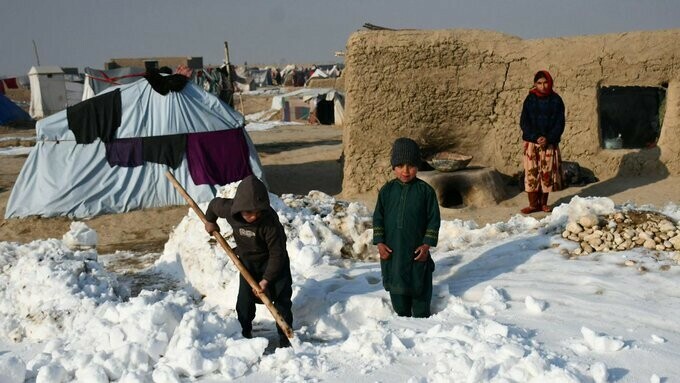 78 people died due to extreme cold in Afghanistan.

According to the authorities, the temperature has dropped to minus 33 degrees Celsius in various parts of Afghanistan, while there are chances of further increase in the severity of cold in the coming weeks.

Abdullah Ahmadi, the head of Afghan Disaster Management, has appealed to aid agencies to come forward to help those affected by the record increase in the severity of cold in these emergency situations.

Several provinces of Afghanistan have been experiencing unusually cold weather for the past two weeks, with the central region of Ghor recording the lowest temperature of minus 33 degrees Celsius over the weekend.

The spokesman of the Islamic Emirate of Afghanistan, Zabihullah Mujahid, expressed his heartfelt condolences to the relatives and families of the deceased.

In his Twitter message, Zabihullah Mujahid said that the relevant institutions and authorities have been instructed to provide all possible assistance to the affected families and use all their resources to prevent further loss of life.

Photos and videos circulating on social media showed roads closed due to heavy snowfall in several central and northern provinces.

Afghanistan is in its second winter under Taliban rule since the U.S.-led forces stepped down from power in August 2021.

Afghanistan is currently suffering from a humanitarian crisis where more than half of the population of 38 million are facing food shortages. Western sanctions and the international isolation of the Taliban administration have aggravated the situation.