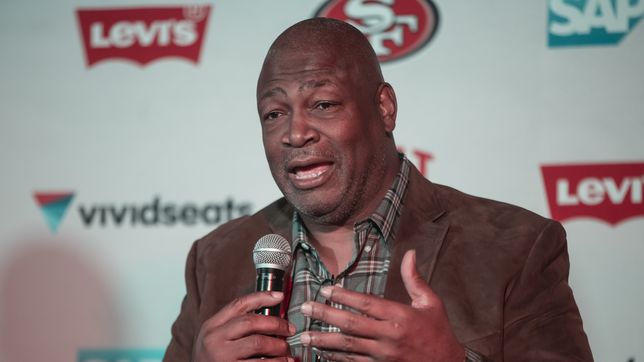 Charles Haley He was one of the historical players of the san francisco 49ers During the 1980s, AS had the opportunity to interview him prior to the NFL Mexico Game between the Niners and the Arizona Cardinals at Estadios Azteca.

The member of the Hall of Fame since 2015 was able to comment on the report that indicates that the Santa Úrsula venue will have 80 percent of fans from the 49ers.

“You know what, I’m okay with it. Like I said, support since we’ve been here, all the red jerseys, people screaming for the 49ersHaley said. “We have a legacy of winners, people want to be close to the champions, they want to keep that legacy alive. The people of Mexico always support the 49ers, through thick and thin.. I am excited to be here, for the fans of Mexico. The Mexican players are already in the league and are giving people something to talk about. That’s great”.

Later, the James Madison graduate explained more about the situation of Mexican players in the NFL. At the moment, alfredo gutierrez He is part of the 49ers practice squad and Isaac Alarcon He’s at the Dallas Cowboys.

“Okay, I don’t really know that guy well with the 49ers, but the Cowboys have a guy, a Mexican guy, an offensive tackle”, explained the member of the Pro Football Hall of Fame. “Let me tell you, he has the determination because he believes that he is the only Mexican who has played this sport. The focus that he goes out with day to day is to win.”

The former pass rusher also believes that Football has the potential to become a national sport in Mexico due to promotion of the NFL in other territories outside of the United States.

“What I am trying to say is that when we go out to promote the game, it is to take the facts. Sooner than later, Football will be a national sport for MexicoHaley said.

The 49ers are one of the teams that have an International Local Marketing Area (IHMA) in Mexico. That means they have facilities to promote the team’s brand for the next five years. For Haley, this is an opportunity that the Niners should make the most of and that if it were up to them, they would have up to three games in Mexico.

“Well, the Niners have nothing to do with the league’s plan. They dictate the schedule, but if it was up to the 49ers they would play three games a year because they love the fans too much, as much as they know they love them”, declared the former player.

IT MAY INTEREST YOU: The absentees of the Mexico City Game of the NFL

Also, Haley took a few minutes to talk about the current situation of the 49ers defense with Nick Bosa as Banner. In doing so, the former player took a walk down memory lane about his own career, explaining that he looks to pass his knowledge on to other generations.

“You know, I was drafted in the fourth round, I was a nobody, I always played with something to prove. He’s a great athlete, the game has changed since I played it,” Haley said. “It’s not to belittle what he’s done, but he has to prove it every week for the team to be successful. Bosa made a big splash coming into the league, he’s an impact player and it’s a joy to watch him play. I always try to talk about the style of play and how I acquired that knowledge to pass it on to the next generation.

During his time in the NFL, Haley appeared in 169 games between the 49ers and Cowboys; in all, he racked up 100.5 sacks. When asked about current quarterback sacks, he noted that the league has implemented many changes since he retired to protect quarterbacks.

“There are a lot more rules now. You can’t throw a quarterback to the ground now, that’s a lot of rules, but they could never stop me one on one”, explained the former player. “I’m not going to put my name above others to boast, but I think I was too confident in my ability to never waver. I believed too much in anyone next to me more than myself and that’s what a team does. That was what made us blood brothers, one for all, all for one.”