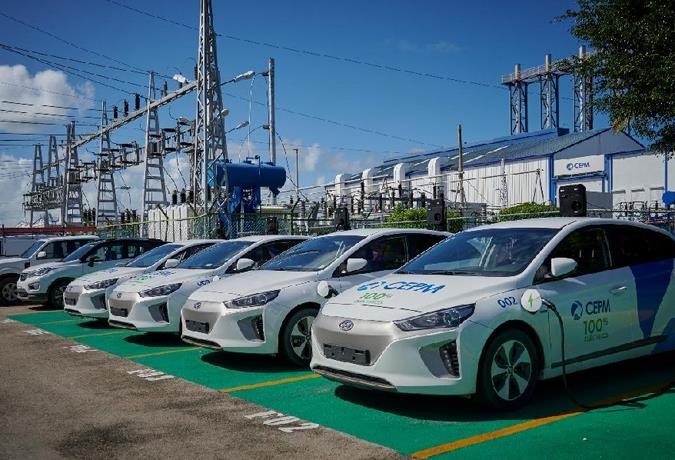 Reaffirming its commitment to zero net emissions, CEPM presented at Fitur the progress of its decarbonization process, which will contribute to turning its concession area into a 100% green destination of world reference, which includes Punta Cana, Bávaro, Macao, Cabeza de Toro, Uvero Alto, Miches, Bayahíbe and La Romana. One of the first steps in this direction has been the expansion of the PV3 and PV4 photovoltaic park, adding a power of 100 MW, in Bávaro.

This corresponds to the initial phase of the CEPM Zero program, announced at Fitur last year 2022, with the commitment to become one of the first electric companies in the world with zero emissions within a decade, through energy from renewable sources. such as wind, solar, pumped hydro and green hydrogen, and cutting-edge storage technology. For this same purpose, it develops projects hand in hand with hotel clients, such as the installation of various photovoltaic parks, with a capacity of 10MW, to supply more than 8,000 rooms with renewable energy.

“In our 30-year history, CEPM has become an ally for the sustainable development of the eastern part of the country, as the main national tourist spot, and we maintain a firm commitment to decarbonizing our operations so that the energy source that feeds our our customers to be cleaner and cleaner.

This is an investment that exceeds more than USD$1,000 million and aspires to continue contributing to the continuous growth and constant expansion of this tourist area in the coming years,” said Rolando González Bunster. Another of the great advances mentioned was the Isla Saona electrification project, through a photovoltaic generation park with a storage capacity of 5 MWh. This project not only allows its 600 inhabitants to have continuous power for the first time in its history, but also the tourist concessions and businesses that receive more than a million tourists a year on this island, and also do so from a source renewable, connected to a smart grid.

In this way, Isla Saona thus becomes the first and only island in the hemisphere that has 100% renewable energy 24 hours a day.

The first electric station in the Caribbean With the goal of promoting more sustainable mobility and boosting the development of the Eastern zone as the first intelligent, zero-emission tourist destination in the country, González Bunster also presented great plans through Evergo, the largest and most sophisticated network of charging stations for electric vehicles in the region that, together with CEPM, is part of the InterEnergy Group portfolio of companies.

The executive gave the news that the first electric station in the Caribbean is being built, in Bávaro, which is conceived as a “hub” that will allow the simultaneous charging of a total of 28 vehicles with level 3 chargers. One of the main qualities is which will be powered with 100% renewable energy, as part of the CEPM concession area. In addition, this space will include a work area with four comfortable private spaces, recreation areas, ATMs, mini markets and cafeterias, among many other amenities. In this way, CEPM unfolds its vision of contributing to the creation of intelligent and sustainable communities in the tourist poles where it operates, now also extending to the Miches area, where it is playing a key role as an ally of sustainability, hand in hand with local actors.

With these and other initiatives that will materialize this 2023, CEPM Zero goes from being a commitment to a concrete plan of which great steps have already been taken and which will sign a milestone both for the history of the company and the country, becoming one of the first zero emission and 100% renewable electricity companies in the world.

Consorcio Energético Punta Cana–Macao, SA (CEPM) is a 30-year history generating, distributing, and marketing company that currently has more than 300 MW of installed capacity with which it supplies energy through from 1,237 km of high, medium and low voltage networks, to more than 65% of the national hotel offer divided into nearly 55,000 rooms.