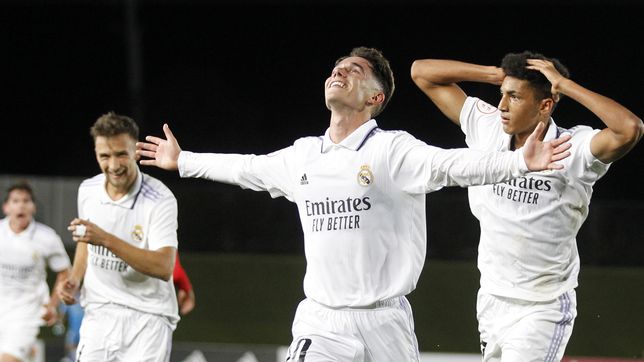 Faced with difficulties, quarry. The lower categories are an ordinary resource in times of lean times. Barça itself took advantage of a pressing crisis in recent seasons (in the deeper case of the Catalans, financial difficulties, results and injuries overlapped) to promote their young values. Ansu Fati, Pedri, Gavi and Balde and others who left the team such as Abde, Ilaix Moriba or Mingueza took advantage of the first team’s tribulations to break through. In Castilla awaits a litter that, led by Raúl, is reaping the best results of the subsidiary in the last decade.

Some already know what it is like with the first team. Arribas (21 years old), who is celebrating his third season in the subsidiary, is the one with the most experience with the first team. Zidane made him debut (in a testimonial way) in Madrid’s league debut in September 2020 at Anoeta and since then he has intervened in eleven games. The midfielder and Álvaro Rodríguez (who, like Nico Paz, is with Uruguay in the South American Under-20) are the only ones who have had minutes this season, in the Cup match against Cacereño. The man from Madrid is the most decisive player in the First Federationaccording to artificial intelligence developed by olocip. Arribas’ actions in the League have generated a value equivalent to 8.52 goals. That is, it contributes to a goal every 205 minutes..

One who has ballots to have minutes in the coming weeks is Vinicius Tobias (18). Lucas Vázquez’s injury, Carvajal’s poor form and Odriozola’s inconsequence in Ancelotti’s plans could give him a chance. Ancelotti took the Brazilian full-back to the preseason (he played 24 minutes against América) and the club signed him up for the Champions League in one of the two remaining free cards on the UEFA A list. The other vacancy was for Iker Bravo (18), a resource for attack. The striker arrived this summer from Leverkusen (he is on loan with a purchase option) and has been surpassed by Álvaro Rodríguez in Raúl’s plans and also in those of Ancelotti, who took the Uruguayan to Cáceres.

For the defense and the midfielder (Alaba and Tchouameni will be out for at least another two weeks) Castilla also offers alternatives. Back Rafa Marín (20) is the boss who directs the rear of Castilla from the axis of the rear. With an imposing stature (he measures 1.91 meters), the Andalusian center-back is a fixture in Raúl’s plans. Ancelotti already called him up last season for the Champions League quarterfinal against Chelsea. Marín is, according to Olocip, the fourth best youngster in the First Federation. Its shares have generated a value of 5.73. Transferred to minutes, he has contributed to generate (score or avoid) a goal every 276 minutes.

For the pivot, Carletto Keep an eye on Mario Martín (18). Without a specific replacement for Tchouameni (Kroos covers the Frenchman’s absences), the coach took the Castilla pivot to Riyadh, who is still in his youth. A long future ahead and a present at the service of the needs of the first team.

Calleja: “The referee has been key”