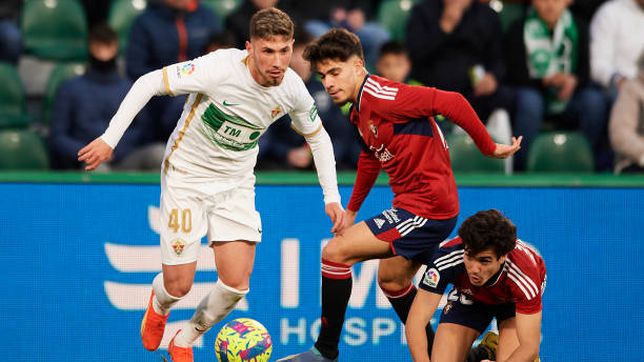 Two of the three signings in the Elche winter market have already secured a place in the starting eleven for Elche. Lautaro Blanco and José Ángel Carmona are already starters and are showing a great level at the start of the year. The Argentine player made his debut in a lineup in LaLiga and showed physicality and quality to occupy the left wing. Carmona has already played two games in a row for the team and against Osasuna he was the best on the team, with a great goal included.

Carmona will not be able to repeat in the line-up next Saturday, at the Ramón Sánchez Pizjuán stadium, due to the fifth card yellow card that he saw at the beginning of the match against Osasuna. The footballer acknowledged, after that game, that he would have been “excited” to play in what has been his home “since he was very young”, but now he will try to “help and encourage” his teammates “from outside”.

The Andalusian defender has adapted to the role of right winger without any problem, as if he had played in that position all his life. “Lately I hadn’t played a lot there, but I’m not having a problem taking that position and helping the team from there,” he said. Carmona assures that “the 1% faith” in the salvation of which he spoke in his presentation “of course it has increased” and that the accounts to maintain the category “go through adding three by three without looking beyond” the next game.

The now Elche player did not want to judge why Sevilla let him leave this January with the competitive level he is showing at Elche: “I cannot enter into that decision and the only thing I can say is that I feel happy to be in this Club and to fight for the objective that he has”.

The winter market has the but of Lisandro Magallan, who despite Elche’s need to improve in the defense axis, only played the last minutes in the match against Cádiz. He was noted to be out of shape and still has to improve to catch up with the rest of his teammates. The club continues to search the market for players to strengthen the center of defense and the midfield.

SFR: the increase discreetly announced at the bottom of the bill goes badly with customers

This is why the Polygon price is skyrocketing