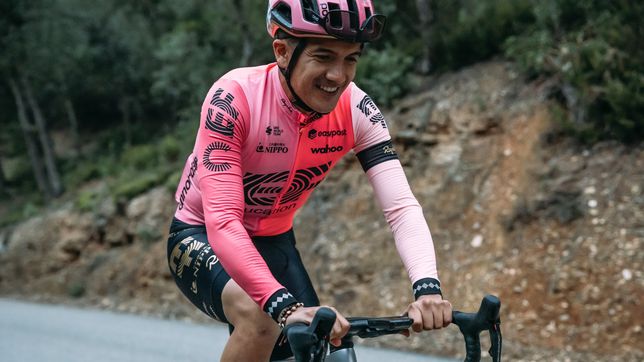 Ecuadorian cyclist Richard Carapaz was presented in Quito as a new member of the EF Education-EasyPost teamin which he assured that he feels like the leader of the formation and confirmed that his great objective for this year 2023 will be to compete in the Tour de France.

“I think that right now I am the number one athlete in EF”, said Carapaz at a press conference with his compatriots and teammates Jonathan Caicedo and Alexander Cepeda.

La Locomotora del Carchi expressed his happiness for all three wearing the same pink jersey of the American team based in Spainsince he stated that he felt more supported to achieve both individual and collective objectives.

Richard Carapaz feels like the true leader of EF

“When we were in Girona (Spain) sharing several days with the team, we felt the support and the desire to seek a common goal,” said Carapaz.

“I think the EF lacked a leader as suchand now having a clear leader is like a path to follow: we know what we are looking for and want, what is the ambition as a team and we have many things that unite us”, he added.

However, the current Olympic road cycling champion and winner of the 2019 Giro d’Italia recognized that he wants to earn the respect and trust of the rest of the team, and he was confident in his virtues to achieve it.

“We have a great opportunity as a team, not only for me to show myself as a leader“, he pointed.

The Ecuadorian cyclist will set his preparation for the Tour de France, where he hopes to arrive in the same or better conditions than in 2021, when he climbed to third place on the podium on the Champs Elysées, what he defined as one of the most special moments of his entire career.

“We are fortunate to prepare first in Ecuador and training with my teammates. I have teammates with whom I can share various training sessions and lead a good preparation ”, he concluded.