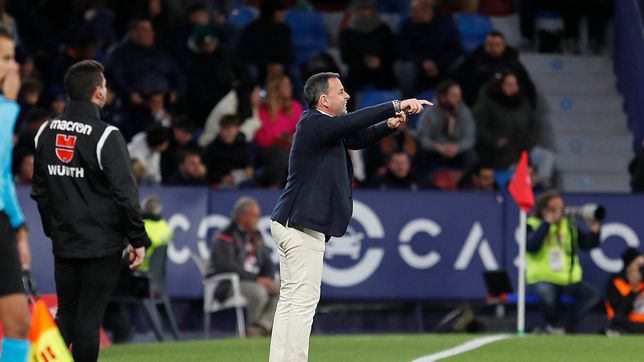 Levante coach Javier Callejaspoke after his team’s defeat against Atlético (0-2) in the round of 16 of the Copa del Rey, which meant his first defeat as coach of Levante.

Are you leaving happy to stand up to Atlético?

I’m leaving annoyed because I don’t like to lose. Of rage. It is Atlético, but what I see matters to me. We played a serious game, standing up to one of the best teams in Spain. We deserved to pass.

What do you think of the referee’s performance?

The referee has been key. The goal that nullifies us is key. It is Oblak who goes with our striker and barely touches him. And the nudge to Álex Muñoz, who was inside the area, and he did not whistle anything. Then there is another play. A very clear throw-in, which we come face to face with Oblak and he is also wrong. But hey… to continue because ours is the League and try to climb to First Division. We can get it.

His streak is over…

Winning is always impossible. It hurts to lose but you have to analyze how you lose. We have lost against Atlético, who is fourth in one of the best leagues in the world. Delete it and think about the next game.

Has Bouldini asked you to change?

He had discomfort but there will be no problem for him to play against Leganés.

What good is this match for the team?

We are still mentally strong, excited, working well… The team shouldn’t regret this defeat. We have played face to face and we have made merit to win but the Cup has already passed, we have enjoyed it and thinking about the League.

Morata’s goal comes when he was preparing the changes…

It hurts to fit in but we wanted to turn the dynamic around a bit… and the goal comes. They are things that happen.

How is the wardrobe?

He’s in a rage and that’s good. We play to win and when we lose it hurts. Be it Atlético, be it the Cup… But let’s forget about the Cup and focus on the League that must be promoted to the First Division.

He has some discomfort in his knee but we hope he can play against Leganés.

How is the subject of the departure of Franquesa?

It is closed and will go to Leganés.