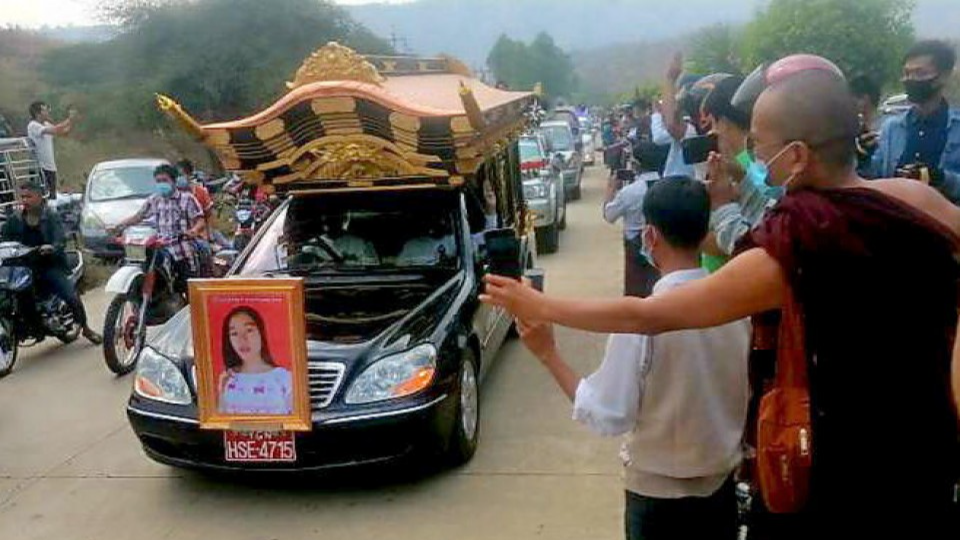 Burma is preparing this Sunday for funeral of the first victim of military repression, a 20-year-old grocer who has become an icon of anti-junta resistance, following the most deadly violence since the coup with two protesters killed by the police.

Almost three weeks after the February 1 coup, pro-democracy mobilization is not weakening from large cities to the country’s remote villages. In light of this, despite the concert of international protests, the army continues to increase the pressure, with more and more incidents reported in recent days. On Saturday, tensions intensified rapidly in Mandalay (center) between the police and anti-junta protesters, including workers on strike at a shipyard.

Fearing the arrest of construction workers, some demonstrators threw projectiles at police officers who fired. “Two people died, including a minor who was shot in the head and about 30 were injured,” said Hlaing Min Oo, head of a voluntary rescue team. According to him, “half of the victims were shot by live ammunition”, the rest were injured by rubber ammunition and slingshots.

The live ammunition was also confirmed by doctors working in the field, on condition of anonymity, for fear of reprisals. More than a dozen people were arrested, according to local media. The country woke up in shock. “Where’s the justice?”, “Stop terrorism”, “How many lives must be taken before the world reacts? We could read on social media.

The tributes began on Saturday in Rangoon, the economic capital, protesters placing white and red roses in front of his portrait with small messages: “You are our martyr”, “We will not forget you”. The joint reported the death of a policeman earlier this week.

This escalation of violence led to new international condemnations. “The use of lethal force, intimidation and harassment against peaceful protesters is unacceptable,” tweeted UN Secretary-General Antonio Guterres from Saturday to Sunday.

The head of European diplomacy, Josep Borrell, appealed “to the army and the police to immediately end violence against civilians”, indicating that the European Union will “make the right decisions”. EU foreign ministers are due to meet on Monday to discuss possible sanctions.

Coercive measures aimed at only a few generals – such as those announced by the United States, Canada and the United Kingdom – will not be enough, several warned. NGO, also asking to reach powerful military-controlled conglomerates. Beijing and Moscow, traditional Burmese army allies at the United Nations, regard the crisis as “an internal matter” in the country.

The junta ignores the convictions. The waves of arrests of politicians, activists and strikers continue. Nearly 570 people have been arrested since February 1, and only about 40 have been released, according to an NGO that assists political prisoners.

Internet connections were cut for the seventh consecutive night, before being restored in the morning. Fear of reprisals is very strong in Burma, where the last popular uprisings in 1988 and 2007 were bloodily repressed by the army.

Despite this, along with street protests, appeals for civil disobedience continue with doctors, teachers, air traffic controllers and railroaders still on strike. Protesters demand the abolition of the Constitution that is very favorable to the military, the return of the civilian government and the release of detainees, including Aung San Suu Kyi, 75 years old.

The ex-leader, who has remained in secret since her arrest, is indicted for non-political reasons, accused of having imported walkie-talkies “illegally” and of violating a law on natural disaster management. A hearing is scheduled for March 1.

The military justified its coup by citing fraud in the November legislative elections, won by an overwhelming majority by the Nobel Peace Prize party. They promised new elections.