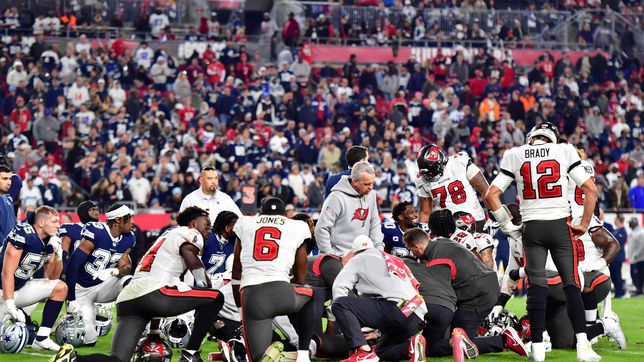 One of the shocking images left by the match in which the Dallas Cowboys defeated the Tampa Bay Buccaneers 31-14, It was the neck injury suffered by the wide receiver of the home team, Russell Gagein the last quarter of the game.

The Buccaneers had not posted additional information on their social networks. until this Tuesday morning where they announced that Gage suffered a concussion, in addition to a neck injury for which he had to be transferred to a hospital in the city.

The team in which he plays Tom Brady also added that the former Atlanta Falcons player will undergo tests this Tuesday to see how he continues to evolve, although they revealed good news because Gage seems to be able to move all his limbs.

YOU MAY ALSO LIKE: Tom Brady numbers in NFL: Super Bowls, rings, MVP’s…

Russell Gage Jr. revealed that he is fine

The player of the Tampa Bay Buccaneers He broke the silence on his social networks after the incident, thanked him for the messages and expressions of affection that he and his family have received.

I appreciate all of the texts, calls, thoughts and prayers you all have expressed towards my family and I. I just wanted to let you all know that I’m doing great and in great spirits!

Russell Gage’s scare during Monday Night Football matchuprecalled some of the difficult moments that took place throughout the season, including the heart attack suffered by Buffalo Bills safety Damar Hamlin and the concussions suffered by Miami Dolphins quarterback Tua Tagovailoa.

Undoubtedly, the biggest scare was from the Buffalo Bills defensive backwho even had to be revived on the court and was even hospitalized for a week.

The Buccaneers announced that they will be providing more information about the state of Gage’s health. in the next few hours and that will keep fans aware of how it continues to evolve.