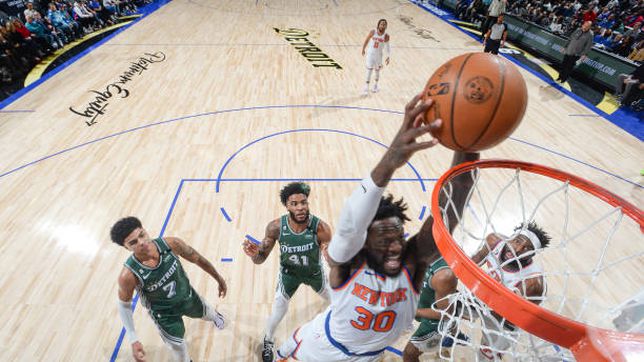 The Knicks add and continue. It seems that they have finally found an identity and that they have left behind that poor start to the season (10-13) and have an identifiable, tangible game. And that, in addition, gives results: 25-19, 15-6 since that calamitous start that nobody wants to remember anymore. Tom Thibodeau has ensured the style and has become strong when his position seemed most in danger, he has given all the responsibility in attack to Jalen Brusnon and Julius Randle and tries to adjust what is necessary in defense. Never a supporter of playing for many points or a particularly brilliant offense in terms of aesthetics, it seems that the coach has adapted enough to his players for his players to adapt to him, believe in his speech, follow his voice and form a single being. In sixth place in the Eastern Conference, avoid the play-in and directly dispute the playoffs It is now a real possibility.

The victory against the Pistons in Detroit was more worked than it should have been, especially if we take into account that the rival was full of casualties: Cade Cunningham, Buddy Boeheim, Marvin Bagley III, Jared Rhoden and Bojan Bogdanovic are out of circulation in a team that does not finish hitting the key or get out of the tremendous hole in which it finds itself, with only the Hornets worse than them in the Eastern Conference. Dwayne Casey and his face almost chiseled in ebony made things difficult for the Knicks and Thibodeau had no problem doing what he always does: put his two stars on court for a whole lot of minutes, rotate little and insist a lot: 40 minutes for Randle and 42 for Brunson. That was the antidote to some Pistons who, by not giving up at any time, forced the Knicks to keep their stars on track.

The fruits of the tactic were reaped: Randle went to 42 points, with 15 rebounds and 4 assists, thus extending his sweet moment of form and achieving his tenth consecutive double-double. Brunson went to 27, with 5 and 4, for another very safe game in which he was the head of operations for the New Yorkers. The resistance of Saddiq Bey and Jaden Ivey, with 21 points per head, was insufficient, while the rebounding power of the visitors (59-44 in this aspect) ended up tipping the balance. Neither the Pistons’ recovery from a horrible first quarter (22-39) nor the honor that Casey tried to convey was enough and the Knicks added their third consecutive victory and the seventh in the last eight gamesa spectacular figure that makes them one of the most fit teams in the North American competition.

Now, to continue. The Pistons do not come out, nor does it seem that they are going to come out, of that hole in which they are involved and in which they will continue to be submerged for another season. And the Knicks are hopeful: the rumors that Thibodeau was out of the game have faded, the voices calling for his departure are no longer whispers and the immediate calendar (Raptors and Wizards at Madison, Hawks and again Raptors away from home) is favorable and it only remains to be seen if it is sustainable and this game will be a constant that becomes regular or if we will see the usual ups and downs again in a team that each time it shows greater reliability, but that, paradoxically, is not completely reliable. For now, this is the way for the Knicks, who are going in a straight line on a road where they do not stop overtaking cars. The rest, We’ll see.

The coronation of Carlos III will have processions, feasts and concerts