the dogs of upturned nose are predisposed to develop certain pathologiessuch as breathing difficulties and eye diseases.

for reasons of animal welfareIn recent years, some countries have restricted the breeding of several breeds of flat-nosed dogs. Norway s Netherlandsfor example, are some of the countries that have established reproduction restrictions of the English Bulldog.

Norway and the Netherlands have already established restrictions on the breeding of the English bulldog due to the disease risks suffered by this breed.

A study published in the journal Canine Medicine and Genetics describes that dogs of this breed are at greater risk of respiratory, eye and skin diseases due to their extreme physical characteristicswhich include a shorter snout, folded fur, and a stocky body.

The authors warn that if breed standards are not redefined to more moderate characteristicsthe UK may prohibit its reproduction.

A breed selected for its extreme physical characteristics

The English Bulldog was selected for the bullfight: a bull baitwhere does your name come from.

In 1835, the Parliament of the United Kingdom passed the Animal Cruelty Act which, among other things, forbade such combats. The breed’s loss of utility led to the decline of the old bulldog and its progressive replacement by the English bulldog modern.

These dogs were selected to fight with bulls, the ‘bull-baiting’, from which their name comes

Over the years, this dog was selected to be less aggressive than its predecessor and, at the same time, maximize its physical appearanceboth facial (flattened muzzle and more pronounced facial wrinkles) and body (thicker and crouching body).

Over time, the English Bulldog became a breed of exhibition it’s from company. Its physical characteristics are short skull (brachiocephalic), the protruding jaw, skin folds is muscular.

The study authors, from the Royal Veterinary College CVR London, compared the risk of suffering from some common disorders between English bulldogs and dogs of other breeds.

For this, they used the database VetCompass: a non-profit RVC project that aims to study the types and frequency of health problems in companion animals in order to identify Risk factors. 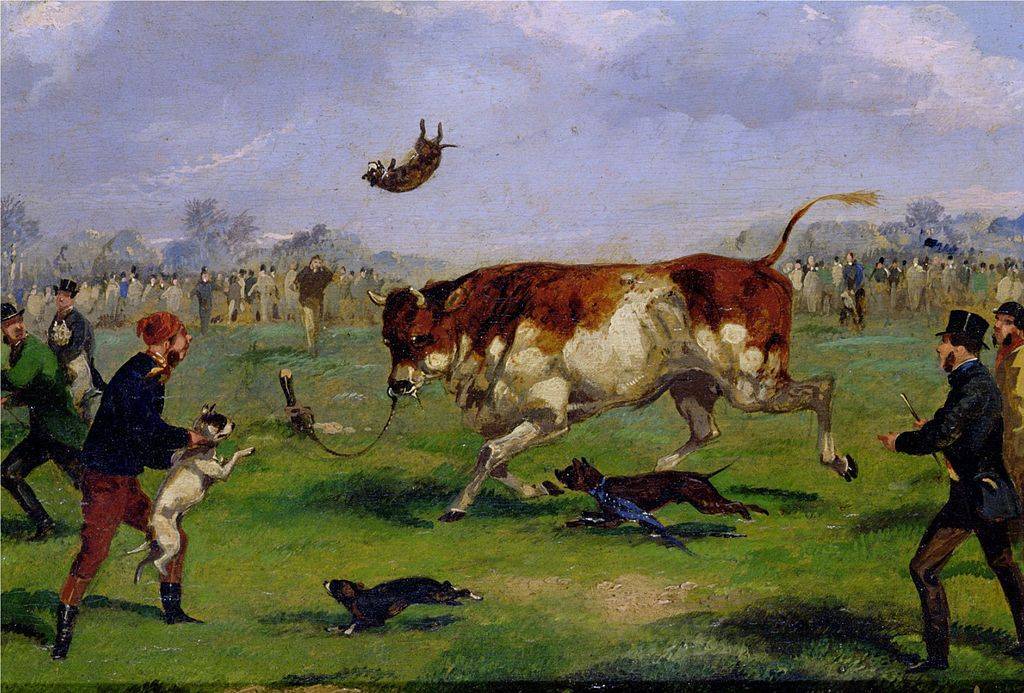 A depiction of bull baiting from the 1890s. / Samuel Henry Alken / Wikimedia Commons

VetCompass collects millions of clinical records from veterinary care facilities so that researchers and veterinarians can access them in order to improve health and wellness of companion animals.

In this investigation, the authors analyzed the clinical records of 2,662 English bulldogs and 22,039 dogs of other breeds. The data came from all UK and dated 2016.

According to the results of the analysis, English bulldogs have twice as many chances than other dogs to be diagnosed with at least one disorder. The breed is predisposed to 24 of the 43 diseases, that is, to more than 50% of the analyzed pathologies.

They are twice as likely as other dogs to be diagnosed with at least one of the disorders tested, including skinfold dermatitis, eye and breathing problems.

Compared to other dogs, English Bulldogs are 38.12 times more likely to develop dermatitis in the skin folds.

The eye of many animals is endowed with a protective structure called a nictitating membrane or ‘third eyelid‘, which houses a tear gland. Prolapse of the latter causes the third eyelid to protrude as a red, swollen mass at the inner corner of the eye. This condition is common in dogs and is commonly called ‘cherry eye‘.

The researchers observed a greater predisposition of English bulldogs to develop this condition and calculated that in these dogs the risk of contracting this disease is almost 27 times greater than in the others studied.

O brachycephalic syndrome It is an obstructive airway pathology. It mainly affects dog breeds that are characterized by having a shortened head. In these animals, the flattened skull shape It is associated with some physical abnormalities that cause breathing problems. The nostrils and throat, for example, are often narrower, making breathing difficult.

In addition to breathing difficultiesDogs that suffer from this syndrome often have other problems, such as sleep apnea, intolerance to physical exercise, sensitivity to heat, vomiting or regurgitation, among others.

According to the analysis of this study, English bulldogs have a risk 19.2 times higher to suffer from this syndrome than the other dogs studied.

In contrast, researchers have found that English Bulldogs have a reduced risk of some conditions, such as dental disease, heart murmurs and flea infestation.

English Bulldogs have a hope of life between eight and 10 years, being generally inferior to that of dogs of other breeds.

The study authors describe that only 9.7% of the English bulldogs included in the survey were older than eight years, compared with 25.4% of other breeds. As the researchers propose, this supports the idea that shorter life of these dogs related to your worse state of health.

Their life expectancy is between 8 and 10 years, which is generally lower than that of dogs of other breeds.

Dan O’Neill, associate professor of companion animal epidemiology at the RVC and co-author of the study, comments: “These findings suggest that the overall health of the English Bulldog is much worse than that of other dogs. However, the most worrying thing is that many of the health problems suffered by the specimens of this breed, such as dermatitis in the skin folds and respiratory problems, are directly related to the extreme physical characteristics to which they were subjected. selected”.

“Given the continuity popularity of the breed, the typical body shape of English Bulldogs must be redefined for the body characteristics more moderate. Doing so will not only improve the health of the dogs, it will also allow the UK to avoid following other countries in banning this breed on animal welfare grounds,” added O’Neill.

The authors suggest that future research can compare the predisposition to these disorders between English bulldogs with more moderate physical characteristics and those of the same breed with more extreme characteristics. This will allow the evaluation of possible beneficial effects of breeding dogs that have less drastic body traits.

O’Neill et al., English Bulldogs in the UK: a VetCompass study of their predispositions and protections for disorders. Canine Medicine and Genetics

The 10 Healthiest Herbs and Their Benefits – EcoPortal.net

June McCarroll, the woman who crossed the line

Dyslexia was fundamental to the evolution of our species