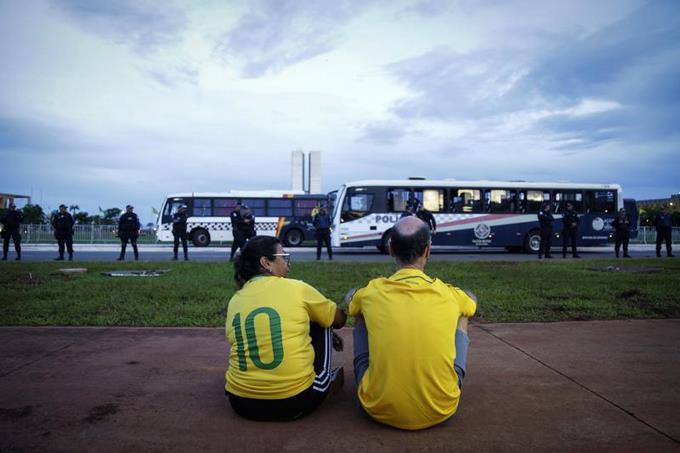 The Brazilian authorities spared no effort on Wednesday to reinforce security after a pamphlet promoting “a mega protest to regain power” began to circulate on social networks in more than twenty cities in the South American nation. Whether it was due to the preventive measures taken or not, the alleged uprising was a failure.

Less than 10 demonstrators showed up to the call on Copacabana beach, in Rio de Janeiro; there were more journalists and 29 police vehicles. On the Brasilia esplanade, which is surrounded by federal government buildings, the authorities had designated an area to protest and deployed police and elements of the national guard. Only a couple arrived at the scene, dressed in the same Brazilian soccer team jersey that thousands of protesters wore four days ago.

“We are surprised to be the only ones here today,” said Eunice Carvalho, a 58-year-old housewife who was accompanied by her husband. “People got scared after the arrests, which were excessive.”

In statements to the press hours earlier, the federal government appointee to assume control of the capital’s security said that the police would close the main avenue to traffic, limit pedestrian access with barricades and block all access to the square that was scene of sunday chaos

“The right to protest freely will always be respected and it cannot be confused with terrorism”, affirmed the official, Ricarado Cappelli.

Before the call to the demonstration, the magistrate of the Supreme Federal Court, Alexandre de Moraes, ordered the local authorities to prevent the protesters from blocking roads or occupying public spaces and buildings. The judge also ordered arrests and fines for individuals and companies that participate in or help with the logistics and financing of the protests.

The forceful response, and the subsequent calm, revealed the nervousness that persists among the authorities after supporters of former President Jair Bolsonaro stormed Congress, the Federal Supreme Court and the presidential palace on Sunday in Brasilia, damaging the three buildings major federal government. Authorities detained some 1,500 people the next morning, hundreds of whom were sent to prison.

Despite there being no evidence of fraud in the October 30 presidential election, protesters have claimed that the real winner of the election was the right-wing Bolsonaro. The former president has fired up his supporters about the vulnerability of voting machines despite assertions by independent experts that the machines are scrutinized. Bolsonaro has also warned his supporters that the winner of the elections, the leftist Luiz Inácio Lula da Silva, would impose communism.

The call for a new protest on Wednesday raised concerns that the crackdown had not appeased the will of the radicals. Among those who have vowed to continue fighting is Daniel Bressan, 35, who traveled some 480 kilometers (300 miles) from the interior of Paraná state to join Sunday’s protest in Brasilia. The police arrested him the next morning, although he denies taking part in any act of vandalism.

“Many people will be afraid to go out into the streets and be arrested, I am also afraid of persecution by the judicial system, but I will not stop fighting and I will not lose heart,” Bressan said by telephone from a center of temporary detention of the federal police. “I am ready for anything. Our freedom is worth more than our lives.”

When will Colombia play in the Caribbean Series 2023: schedule, matches and results