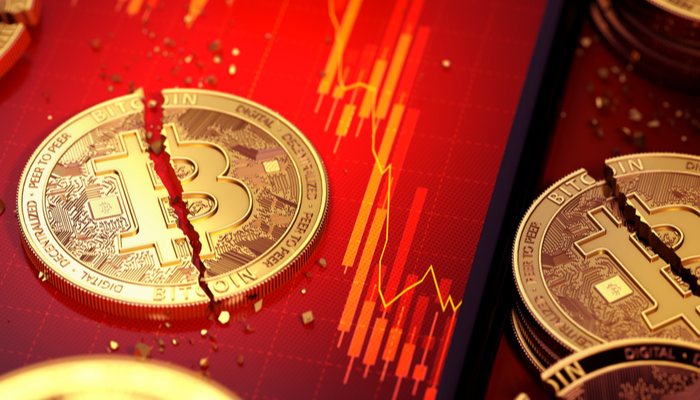 Bitcoin (BTC) turns red for the first time in two weeks. At the end of yesterday afternoon, fear kicked in again and bitcoin plummeted from $21,500 to $20,400. Subsequently, the price made a small bounce, but failed to recapture $21,000. Still, bitcoin found support around $20,750 last night and very gently rose overnight to the current price of $20,800 on Binance and $19,190 on Bitvavo.

This puts the bitcoin price down 2.2% today. The trading volume increased by 22% in the past 24 hours. The total market capitalization is $401 billion and the dominance is 41.4%. The Fear & Greed Index comes out at 45 (Neutral).

The fact that crypto is volatile and that sentiment can turn quickly became clear again yesterday. Yesterday afternoon, the US Department of Justice suddenly announced that it would be making a major announcement about enforcement against a major crypto exchange. That followed news of further problems at Digital Currency Group (DCG) and Genesis.

The panic immediately set in and almost all prices took a nosedive, many crypto fell by more than 10%. A few hours later, the authority announced that it concerns crypto exchange Bitzlato, a relatively unknown platform. The market reacted with relief and prices immediately bounced. Shortly afterwards, the Russian founder was arrested for laundering $700 million. More on this later on Crypto Insiders.

Founder and Majority Owner of Cryptocurrency Exchange Charged with Processing Over $700 Million of Illicit Fundshttps://t.co/1rn8476KdJ

The decline was accompanied by the largest so-called long squeeze since the FTX crash in early November. A whopping $21 million in bitcoin long positions were liquidated in just an hour, reports On-Chain College.

Not for any reason, anyway; other markets also red

Still, the fear fueled by the US Department of Justice was not the only reason for the red numbers. We also saw other markets fall sharply, the S&P 500 even fell by 2%, the biggest drop in more than a month.

These declines followed somewhat weak economic data in the US that reignited concerns about a possible recession and a hawkish policy of the Federal Reserve.

Analyst Gaah reports that another significant outflow of bitcoin from exchanges took place yesterday. 5,647 BTC was taken from exchanges, which is usually one bullish sign for the course.

-I will continue to update if there are more moves on the Spot market 🙌🫡 pic.twitter.com/onJcOfIAz5

However, analyst IT Tech warns that bitcoin miners are actually sending BTC to exchanges, and that is usually a bearish sign for the course.

“This kind of miner behavior is increasing selling pressure on the market.”
by @IT_Tech_PL

Analysts seem to be becoming more cautious after the positive sentiment of the past few weeks. Analyst Philip Swift reports that the Net Unrealized Profit/Loss (NUPL) is finally out of the capitulation zone. That could mean that the price has reached its bottom and we are starting a new cycle.

However, the poor macroeconomic conditions and the issues surrounding DCG could mean that we will go down again, says Swift.

NUPL is now out of the capitulation zone.

Bear: we go back lower because of Genesis/global macro.

Bull: we have bottomed and this is the start of a new cycle.

Analyst Caleb Franzen reports that 21-day exponential moving average (EMA) is now above the 55-day EMA. The last time this happened was in March 2022 and was followed by a big one pullback in April. That does not have to happen again, of course, but it is good to be prepared for this, says the analyst.

The last time this happened was in March’22.

During the pullback in April, #BTC fell below these EMAs & flipped them into resistance before plummeting. Let’s hope history doesn’t repeat.

Hope for the best, plan for the worst. pic.twitter.com/DO2msReijo

Trade together with Crypto Insiders

Are you looking for help with trading? Do you have questions and would you like to receive technical analyzes for a large number of crypto coins immediately? Join and try a Premium membership free for 30 days. Here our analysts share their market knowledge and the latest analyzes 24/7. Here you can also get in direct contact with various market experts and crypto enthusiasts who are ready to help you!

Disclaimer: Investing involves risks. Our analysts are not financial advisors. Always consult an advisor when making financial decisions. The information and tips provided on this website are based on our analysts’ own insights and experiences.