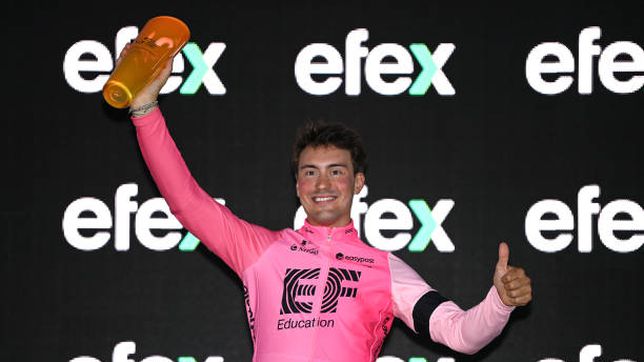 The 2023 season of the UCI World Tour got underway this Tuesday with the prologue of the Tour Down Under in which the Italian Alberto Bettiol became the first leader of the race after being the fastest in a prologue with a route of 5.5 kilometers through the streets of Adelaide in which the Italian took the start before the rain marked much of the race.

Australian James Moriaty was the first cyclist to start the prologue. A prologue in which Alberto Bettiol achieved the best time at the finish line with a record of 6:19 before the rain further complicated the route with the asphalt of the streets of Adelaide completely wet and in which some falls were seen for this reason when drawing the curves.

A time of Bettiol to which only Sam Gaze managed to get close with his 6:30 mark, while other favorites such as Simon Yates and Jai Hindley, who competed in a striking helmet, decided not to risk excessively over the course. Neither Michael Matthews, nor Luke Plapp, nor Rohan Dennis managed to come close to Bettiol’s time, something that Magnus Sheffield did, stopping at 6:27, eight seconds behind the Italian.

As the road dried up, the times also improved, so runners who came out last like Australian time trial champion Jay Vine, who set a time of 6:33; the Danish Julius Johansen, who surprised with his 6:29; and Kaden Groves, who arrived at 6:30, were close to Bettiol’s timebut without being able to overcome the Italian, who this Wednesday will start as the leader to face the first stage.

As for the Spanish cyclists present at the Tour Down Under, a good prologue by Marc Brustenga, who finished eighteenth, 18 seconds behind Bettiol (6:37) and Pello Bilbao, one of the candidates to fight for the general classification, who stopped the clock at 6:39.

Tour Down Under prologue and general classification