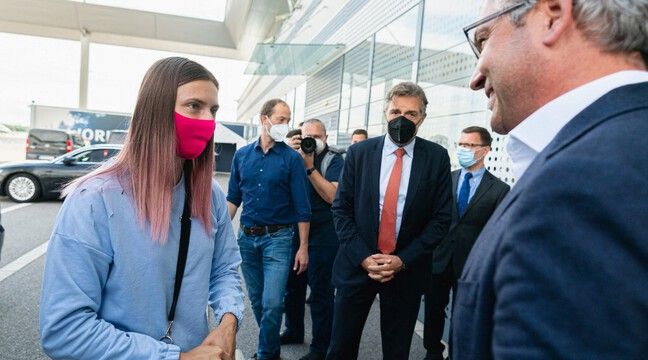 Threatened with being forcibly repatriated to Belarus after criticizing sports bodies following a dispute at the Tokyo Olympics, Krystsina Tsimanouskaya was initially scheduled to take a direct flight from Tokyo to Warsaw. But he changed his route at the last minute.

In Vienna, where she landed shortly after 1 pm, a black vehicle, followed by two patrol cars, awaited the 24-year-old, whose case has dominated the extra-sports news of the Tokyo Games in recent days.

It was about “preserving their safety,” Austrian Secretary of State Magnus Brunner explained to the press, who attended his meeting, according to official photographs in which the athlete is seen appearing in jeans and a colored mask.

Krystsina Tsimanouskaya appeared “in good shape under the circumstances,” he told reporters. “She naturally cares about her family. She is tired and tense after the events of the last few days, “nervous about what awaits her,” Mr. Brunner explained.

Until now unknown to the general public and low-key on politics, Krystsina Tsimanouskaya suddenly found herself in the spotlight. He said on Sunday that he escaped forced repatriation to Belarus, just days after openly criticizing his country’s athletics federation amid the Tokyo Olympics.

Fearing he would end up in prison if he returned to Belarus, Krystsina Tsimanouskaya had obtained help from the International Olympic Committee (IOC) and police protection while at the Tokyo-Haneda airport.

He then took refuge in the Polish embassy in the Japanese capital, while the IOC launched an official investigation.

The Polish government, which has vowed to “continue to actively support the entire Belarusian nation and persecute opposition activists,” also granted a humanitarian visa to the athlete’s husband, Arseni Zdanevich, who had fled to Ukraine, on Wednesday. Then the athlete moved to Warsaw, where she will speak to the press for the first time on Thursday.